When a tiger came calling at midnight...

Thirunelli (Kerala), Feb 11: A family here had an unexpected visitor knocking at their door in the middle of the night and were shocked to see a tiger trying to push through the main entrance.

The house is located on the forest boundary at Thirunelli in Wayanad district and the area is frequented by wild animals, including tigers, police sources said.
Forest officials have found strands of tiger hair near the steps of the house and claw marks on the plywood door which was damaged in the attack.

The family has a pet dog and the big cat might have been attracted by it, according to them.

An official of the Thirunelli police station, which is adjacent to the house, said he had visited the place and found the claw marks of the animal.

It had come till the verandah and tried to open the door, the official told PTI.
Salitha, a 42-year old homemaker and her nephew Mridun (22) had got the shock of their life seeing the "visitor" on Tuesday midnight.

They heard a strange sound from outside around 11 PM and after a while felt someone was trying to push open the front door.

Mridun claimed that the door was half opened by the tiger and said along with his aunt managed to close it with great difficulty.

Forest officials have set up two camera traps around the house, but have not managed to get any pictures of the animal so far, Thirunelli deputy range officer, M V Jayaprasad, told PTI.

"There are no pug marks of the animal, but the door has been damaged. Strands of tiger hair have also been found near the steps".

"The tiger had come to the house. But, we do not know if it opened the door," the official said. - PTI 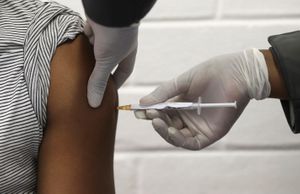 COVID-19: Over 70 lakh vaccinated in India