A water tank, with a fountain at the centre, dating back to the 16th century Mughal era, has been found by the Archaeological Survey of India (ASI) in Fatehpur Sikri.
During the conservation work of the Todarmal Baradari, an area around it was being excavated when the discovery took place. A baradari or Bara Dari is a building or pavilion with twelve doors designed to allow free flow of air.
Superintending Archaeologist of ASI (Agra circle) Vasant Swarankar, said "During excavation, a square tank, with arms measuring 8.7 m and depth of 1.1 m, was discovered. The floor of the fountain tank is lime plastered, containing embellished patterns in lime as well. It must have been constructed along with the Baradari at that time."
The ASI is now mulling further excavations in the area.
Raja Todar Mal was the finance minister of the Mughal empire during Emperor Akbar's reign. He was one of the 'Navratnas' in Akbar's court and introduced a new system of taxation.
Fatehpur Sikri was known for its mansions, gardens, pavilions, stables and caravansaries. The Baradari has survived in a recognizable shape. - IANS 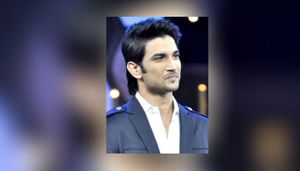 Gulshan Devaiah to Sushant: Your life is a great learning