In yet another tragic disaster in Uttarakhand State, a chunk of the Nanda Devi glacier broke off at Joshimath in the Chamoli district last Sunday, triggering an avalanche. The snow falling into the Alaknanda river system created a powerful deluge that washed away hydroelectric stations and trapped over hundred workers. Apart from destroying houses and wreaking havoc to the adjacent environment, the flooding of the interlinked Dhauli Ganga, Rishi Ganga and Alaknanda rivers caused extensive damage to two power projects, NTPC’s Tapovan-Vishnugad hydel project and the Rishi Ganga hydel project. Though continuous rescue efforts to save the lives of the trapped workers are being carried out, there is very real fear that a number of them have either been washed away or were killed by mud and sludge. This natural disaster has brought back memories of the horrendous event of June 2013 at Kedarnath, when an unprecedented cloudburst had caused deadly flooding and landslides which killed over five thousand people, one of the worst to have occurred globally. The recurrence of this natural disaster, despite being on a lesser scale, is a stark reminder of the ecological vulnerability of the Uttarakhand region and the care that should be taken while planning projects that require significant human intervention. This is, of course true, not only for this State, but the entire Himalayan range given the lithological fragility of the terrain.

Experts have attributed the havoc caused by this latest natural disaster to two reasons. First is climate change and global warming which has seen astonishing depletion of ice cover in the planet with, among other developments, Himalayan glaciers melting twice as fast since the start of this century. In June 2019, a study spanning 40 years of satellite observations across India, China, Nepal and Bhutan, indicated that climate change was eating up the Himalayas’ glaciers. The study, published in the journal Science Advances, showed that glaciers had been losing the equivalent of more than a vertical foot and a half of ice each year since 2000, which was double the amount of melting that took place from 1975 to 2000. The thinning of glaciers, according to experts, leads to their fragmentation, and it had been the sliding of one such chunk that might have caused the Joshimath disaster. Environmentalists in recent times have also been cautioning that increased human intervention in the ecologically sensitive Himalayan region is making it even more vulnerable to climate change. Though heavy construction work in fragile eco-sensitive zones must be avoided, the quest for development entailed that such activities, getting energy by building of hydroelectric projects or improving communication through road construction, had been carried out in Uttarakhand, with occasionally disastrous consequences. Dam builders in other regions of India such as Arunachal and Assam surely need to learn a lesson from the tragic disaster that befell Uttarakhand! 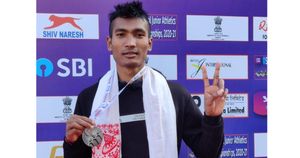