Tezpur Medical College (TMC) has completed seven years of its existence today. On this day in 2014, then Chief Minister late Tarun Gogoi had inaugurated the Tezpur Medical College and Hospital (TMCH) and dedicated it to the people of Assam. Though it was inaugurated on January 30, 2014, the outpatient services were started on December 18, 2013, and the indoor services in February 2014.

Situated at Tumuki village of Bihaguri block of Sonitpur district, about 20 km away from Tezpur town, the existence of TMC has ushered in economic development at Tumuki and its surrounding areas and provided employment opportunities to the local people as well.

The need for a medical college in the north bank of the Brahmaputra had been a long-standing issue. The issue gained momentum in the year 2005, when a Society for Medical Education was launched in Assam, under which establishment of three medical colleges, in Jorhat, Barpeta and Tezpur, were planned. Thus, the journey for establishment of the sixth medical college of Assam started in 2005 itself with the formation of the Society for Medical Education, Tezpur (SMET) and acquisition of 110 bighas of agricultural land at Tumuki. The Memorandum of Association for the SMET was signed on August 19, 2005. The foundation stone for construction of the TMC was laid by the then President of India, Pratibha Patil, on October 21, 2008. The construction of buildings and other ancillary facilities progressed during the next five years and were completed towards the end of the year 2013, when faculty members, doctors, nurses, office staff, paramedical staff and other employees of TMC were gradually recruited.

It is really a challenging task to convert concrete buildings into a medical college. For TMC, the toughest challenge, of course, was the inspection by the Medical Council of India (MCI) and its subsequent granting of permission. The MCI (now replaced by National Medical Commission) conducted the first inspection at TMC on May 16-17, 2014. On the recommendations of the MCI, the Government of India permitted TMC to admit 100 students into the MBBS course for the session 2014-15. On August 1, 2014, the academic session was formally launched.

There are seven batches of MBBS students studying in TMC today. January 25, 2019 is a historic day for TMC as it produced the first batch of MBBS doctors on this day.

Meanwhile, the MCI inspected several departments of TMC for postgraduate courses. On its recommendation, the Govt of India permitted TMC to start postgraduate degree courses almost in all the departments. In July 2020, the first batch of postgraduate students took admission in it and today TMC is a postgraduate medical college.

The teaching and non-teaching staff, the present Principal cum Chief Superintendent Prof (Dr.) Karuna Hazarika, postgraduate trainees, interns and the students of TMC are all dedicated to working for development of the college, though they are facing many problems. The major problems include shortage of accommodation for faculties, doctors, staff and nurses, shortage of hostels for PG and UG students, lack of hostels for interns and resident doctors, guest house, safe drinking water, auditorium, recreation facilities, utility building, examination hall complex and playground. Still, the faculties of TMC are providing the best of education to the students and the best of healthcare services to the patients. The students of TMC are excellent in academics as well as extracurricular activities. The pass percentage of TMCians is very high and its students regularly occupy positions in the top 10 with Honours marks in every MBBS examination under SSUHS. They often participate and win prizes in national and State-level competitions in the field of sports, literature and cultural activities.

Shyamoli Sajere Aai Mor Rupohi Mahabharotore Sadori Ji – written and given tunes to by noted lyricist Charu Kamal Hazarika, is the college anthem which was first sung by the students of TMC on its anniversary on January 30, 2016. Chitrapat is the college magazine.

The hospital section of TMC is providing quality healthcare services to the people of several districts of north Assam and parts of Arunachal Pradesh with modern facilities. The hospital section consists of a 500-bed building with modern equipment, ICU, NICU, operation theatres, emergency operation theatres, emergency complex with triage area, observation ward, laboratory, blood bank with component separation facility, 128 slice CT scan machine, MRI machine, oxygen tank, mortuary, etc. There is no adequate number of paying cabin complexes and proper external drainage system for the liquid affluent in the TMCH campus. These have to be sorted out.

During the peak of the Covid-19 pandemic, the TMCH was almost converted into a Covid hospital. All the faculties, PG trainees, interns, nurses, paramedics and health workers served in the Covid screening, Covid isolation ward, ICUs, laboratories and Covid care centre at Paruwa dedicatedly under the dynamic leadership of the TMCH administration. Therefore, the recovery rate of Covid-19 was high and fatality rate low at TMCH.

The number of patients at TMCH is increasing day by day. There are altogether 22 departments in it now. With the increasing flow of patients to the hospital, the need for some super-speciality services like cardiology, nephrology, neurology and neurosurgery are also being felt. As it is situated by the side of the National Highway, the establishment of a trauma centre would be ideal. For all these additional facilities at TMC, the government must provide manpower, additional space, infrastructure, equipment and more funds. With time and necessary financial help from the government, the TMC has all the potential to be one of the best medical colleges in Assam to fulfil the hopes and aspirations of the people of Assam.

(Published on the occasion of the foundation day of TMC) 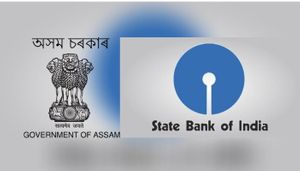