Dubai, Feb 8: India's flamboyant wicketkeeper-batsman Rishabh Pant on Monday won the ICC's inaugural Player of the Month award for his superlative performances in the two Tests against Australia in January.

Pant scored a 97 at Sydney and an unbeaten 89 at Brisbane that powered India to an incredible series win against arch-rivals Australia Down Under.

Commenting on winning the inaugural award, a delighted Pant said in an ICC release: "For any sportsperson, contributing to a team win is the ultimate reward but such initiatives help motivate youngsters such as myself to do better each time.

"I dedicate this award to every member of Team India that contributed to our victory in Australia and also thank all my fans who voted for me."

Pant blazed his way to a breathtaking 91 on the third day of the ongoing first Test between India and England in Chennai.

Speaking about Pant winning the award, former Pakistan skipper Ramiz Raja, representing the ICC Voting Academy, said: "Both times Pant played under pressure in two different sets of challenges: to draw a game and to win a game. He showed his versatility of skills in both knocks, the clincher being his temperament."

South Africa's Shabnim Ismail was named the ICC Women's Player of the Month following her performances across three ODIs and two T20Is during the month.

Ismail took seven wickets in the victorious ODI series against Pakistan, before taking five wickets in the second T20 International against the same opposition.

According to a release issued by the game's governing body, the three nominees for each of the categories were short-listed based on on-field performances and overall achievements during the period of that month (the first to the last day of each calendar month).

The short-list was then voted on by the independent ICC Voting Academy and fans around the world.

The ICC Voting Academy comprises prominent members of the cricket fraternity including senior journalists, former players, and broadcasters and some members of the ICC Hall of Fame. - PTI 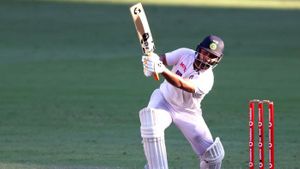