GUWAHATI, Feb 3: As a consequence of the months-long lockdown, road accidents involving street dogs have increased exponentially in the city in the past few days. As a result most shelter homes for street dogs located in different parts of the city, have become overcrowded. Moreover, accidents also claimed the lives of a number of puppies across the city in recent days.

Talking about the situation, city-based animal rights activists Rashmi Choudhury said, “During the lockdown we had noticed changes in the behaviour of the street dogs. Earlier their space of movement was limited, but the lockdown had expanded their space. As a result, most street dogs used to sleep very close to the road. Now, with the relaxation in the lockdown, the number of road accidents involving street dogs has been increasing drastically.”

Along with Choudhury, a number of other animal lovers and animal rights activists are now working on rescue and rehabilitation of street dogs in the city. But Choudhury rued that most of them are now not in a condition to continue with the rescue activity as their animal shelter facilities have become overcrowded with abandoned and injured street dogs.

Another city-based animal rights activist said that as per the Dog Rule 2001, it is the duty of the Guwahati Municipal Corporation (GMC) to take care of the street dogs of Guwahati city along with carrying out sterilisation and anti-rabies vaccination drives.

“The GMC should constitute a dog squad to address the street dog issue in the city,” the animal rights activist said.

Meanwhile a senior official of the GMC said that they are working to their full capacity by engaging non-governmental organisations to address the issue of street dogs in the city.

“There are some NGOs in the city that have been receiving huge funds from the Central government and other sources to take care of stray animals. If they work properly, then the issue of street dogs will be mitigated to a considerable extent,” the official said.

Meanwhile, an official of the State veterinary department informed that the department has taken up a scheme to carry out an anti-rabies vaccination drive across the State, but due to scarcity of funds they are not in a condition to implement the same. 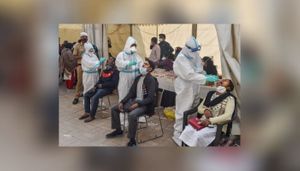