Accordingly, the market opened at record high on back of favourable cues from global bourses.

The market continued to remain in favour of advancing counter.

Among sectors, Banking, IT and Realty were major gainers; while Media, Auto and Pharma slipped in in the red.

"Overall chart structure of Nifty is quite strong and bulls are not in any mood to take a rest," said Jay Purohit, Technical and Derivatives Analyst, MOFSL.

"In such market conditions, one shouldn't look for shorting opportunity and avoid pre-empting 'Top' in market."

According to Likhita Chepa, Senior Research Analyst at CapitalVia Global Research: "Markets continue to follow the positive momentum after the positive global cues and rallied to make a high of 15,237.90, and currently is trading at 15219."

"Foreign portfolio investors (FPIs) investment in the Indian market was at 5 year high in December which has led to a rally in the market. FPIs continue their buying in the current quarter as well." 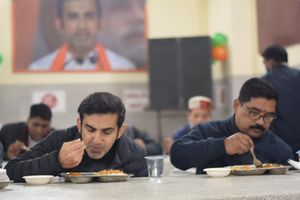