New Delhi, Feb 2: After forcing repeated adjournments in the Rajya Sabha, the opposition on Tuesday forced the Upper House to be adjourned for the day minutes after it reassembled for the third time as both Chairs found it difficult to continue business amid ruckus over farm laws.

The Rajya Sabha was first adjourned till 10.30 a.m. after the opposition refused to accept the Chairman, M. Venkaiah Naidu's rejection of suspension notice. The second was till 11.30 a.m., and after it reassembled the third one was till 12.30 p.m. Following this, the House was finally adjourned for the day amid unabated ruckus created by the opposition benches.

Parliament witnessed unruly scenes the moment it assembled a day after the Budget was presented.

Rajya Sabha Chairman M. Venkaiah Naidu rejected a suspension notice given by the opposition on the farm laws.

The rejection did not go down well and the opposition members who returned minutes after walking out and raised slogans before the Chairman's podium.

The Chairman said: "The ongoing dialogue between the agitating farmers and government can be discussed during the motion of thanks of President tomorrow (Wednesday)." Following which there was a pandaemonium and the House was first adjourned till 10.30 a.m.

The suspension notice was given by Manoj Jha of Rashtriya Janata Dal, Ghulam Nabi Azad of Congress, T. Shiva of DMK, Ashok Siddarth of Bahujan Samaj Party, and E. Kareem from CPI-M. The opposition gave notice under rule 267 of the Rajya Sabha. 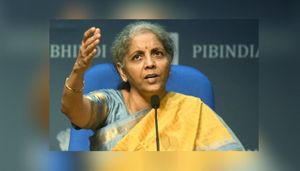 Union Budget: A vicious cycle of deficit and debt