Nikita Khrushchev could not have been more apt when he said that politicians promise to build a bridge where there is no river. Come election time and this, and also the adage that promises are meant to be broken, finds its best exemplification. With only a couple of days left for the first day of polling for the three-phase election in the State, all the major political parties have released their poll manifestos, promising the moon for the masses. Indeed, if one were to judge by the contents of the manifestos, one cannot help admiring the ‘commitment’ of the political class to the cause of the people. A look at the poll manifestos of different parties can be quite illuminating. There is very little to differentiate one manifesto from the other, as every party seems committed to address the concerns of poverty, unemployment, flood and erosion, infiltration, health, education, environment and what not. And all invariably claim to possess the magic wand to solve those if voted to power. Notwithstanding some progress made in the past two decades, the State is in dire need of a healthy dose of developmental interventions and this needs to be the actual priority of those keen to assume power. However, what is needed for accomplishing this is not cheap rhetoric but a genuine vision. Populist announcements too cannot lead us anywhere near reaching the avowed goals of development, livelihood security and self-reliance but regrettably, the parties are locked in a competitive exhibition of one-upmanship vis-a-vis promises centring on freebies.

Both the BJP and the Congress, the two major parties, have pledged to safeguard Assam’s culture and traditions. In the same breath, the BJP is asserting implementation of the CAA, which poses a serious threat of rendering the Assamese a linguistic minority in their homeland. To win over the masses, the BJP has constantly been harping on the dangers stemming from a growing immigrant Muslim population, with some senior leaders equating the entire populace with illegal Bangladeshi migrants and wedging a communal divide to suit its narrow agenda. None have stopped the Government from taking action on illegal migrants and they need to be shown the door or at least deprived of their citizenship rights. The NRC updating was an exercise precisely aimed at that but the BJP Government is fuming over it as the number of Muslim illegal immigrants identified fell short of its liking. As for the Congress, the fact that the manifesto of the party which had been in power for three successive terms until the BJP drubbed it in the last Assembly polls has nothing in it to distinguish it from its earlier documents goes to show that the party had done little to solve the ills afflicting the State for decades. And their opposition to the CAA is little more than an anti-BJP stand. Monotonously repetitive manifestos and poll promises can mean only one thing – nothing had been done to fulfil the pledges made earlier. 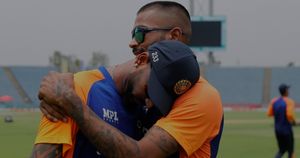 Got dad’s bag to dressing room to keep him close: Krunal

Elections: A time for vain promises