Manchester, Jan 31: A last-minute consolation and a bundled effort from a long throw-in are the only goals Manchester City have conceded in nine games across all competitions in 2021.

Pep Guardiola, one of the most attack-minded coaches in soccer history, has constructed a virtually impenetrable defensive unit in his fifth season at City and it is providing the platform for the team’s latest run at the Premier League title.

City’s lead grew to three points on Saturday after their battling 1-0 win over last-placed Sheffield United was followed by second-placed Manchester United’s latest slip-up, a 0-0 draw at Arsenal.

Since a 5-2 loss to Leicester in City’s second league game – a result that shook Guardiola and led to him tightening up his defensive unit – the team has kept 20 clean sheets in 29 games in all competitions, conceding just 10 goals.

On a day when Guardiola rotated his lineup and City’s attack was never at its free-flowing best, a close-range effort from Gabriel Jesus in the ninth minute was enough to earn an eighth straight league win and see off a hard-working Sheffield United side looking far from the worst side in the division.

“When I woke up and went out of my building, I saw it was windy and freezing and I said, ‘Today will be the toughest game we are going to play this season’,” Guardiola said.

City’s 13 goals conceded is by far the fewest in the league heading into the second half of the campaign. Tottenham and Arsenal are tied for the next best record, with 20.

NEWCASTLE REBOUNDS: After five straight defeats that saw the team plunge toward the relegation zone, Newcastle bounced back with a 2-0 win at Everton to move eight points clear of the bottom three.

Callum Wilson scored two goals in the second half and now has 10 in his first season at the club following an off season move from Bournemouth.

Everton missed out on the chance to climb to fifth place, and manager Carlo Ancelotti accused his players of being ‘lazy, slow, not focused’.

Newcastle’s win was bad news for Fulham and West Bromwich Albion, two teams in the relegation zone which shared the points in an entertaining 2-2 draw at The Hawthorns.

Fulham occupy the third and final relegation spot and are four points from safety.

After a strong start to the season, Southampton are slipping down the standings and lost 1-0 at home to Aston Villa to make it three defeats in a row.

Ross Barkley scored the first-half winner by heading in a cross from Jack Grealish. – AP 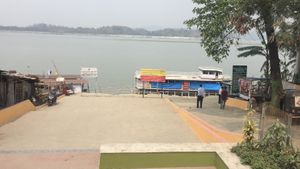 ‘Scientists, varsities must work in tandem with industry for mankind’s welfare’