India, Pak agree for strict observance of all LoC agreements

New Delhi, Feb 25: India and Pakistan reviewed the situation along the Line of Control (LoC) in Jammu and Kashmir, and agreed for strict observance of all agreements, and understandings, Indian Army said on Thursday.

A joint statement was issued in New Delhi and Islamabad. It stated that the Director Generals of Military Operations of India and Pakistan held discussions over the established mechanism of hotline contact.

"The two sides reviewed the situation along the Line of Control and all other sectors in a free, frank and cordial atmosphere," the statement said.

It further pointed out that in the interest of achieving mutually beneficial and sustainable peace along the borders, the two DGMOs agreed to address each other's core issues and concerns which have the propensity to disturb peace and lead to violence.

Both sides agreed for strict observance of all agreements, understandings and cease firing along the LoC and all other sectors with effect from midnight February 24 and February 25, 2021.

"Both sides reiterated that existing mechanisms of hotline contact and border flag meetings will be utilised to resolve any unforeseen situation or misunderstanding," the statement said.

On Wednesday, Indian Army Chief General M.M. Naravane, while speaking at a webinar organised by the Vivekananda International Foundation, said that there is definitely a great improvement in the internal security situation in Jammu and Kashmir. He, however, stated that Pakistan-promoted terror still remains a threat.

Indian Army Chief said that Pakistan is committed to the strategy of supporting terrorism in all its forms as terrorist launchpads continue to be operated and terrorists continue to be there on the other side of the LoC looking for an opportunity to cross over.

General Naravane expressed confidence that with continued engagement with Pakistan, there could be some sort of an understanding because unsettled borders and violence on the borders help no one.

Talking about terrorism, General Naravane said the winter months are always a little bit of a lull period when the passes are closed and snowfall is heavy. He said with the waning of winter, as the passes open and the onset of summer, the army is always prepared for a fresh influx from across the border.

"But having said all that, there is definitely a great improvement in the internal security situation in the union territory of Jammu and Kashmir. When I say that, I don't say that just based on the emotion but on various parameters you can judge the figures," General Naravane said. 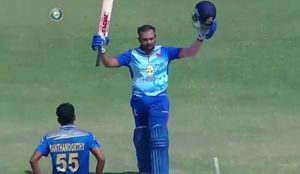