New Delhi, Feb 5: At least 12 MPs from nine Opposition parties have written a letter to Lok Sabha Speaker Om Birla, requesting him to take steps to protect their rights and also allow a separate discussion on the farmers' issues in Parliament, saying Delhi's Ghazipur border seems like the "border between India and Pakistan".

The MPs are among the parliamentarians who were stopped by the Delhi Police from meeting the agitating farmers at the Ghazipur border on Thursday.

In the letter, the MPs requested the Speaker to take such steps which "deem fit and proper to you to protect the rights of the elected Members of Parliament and also allow a separate discussion on the farmers' issues in Parliament".

The parliamentarians said, "Sir, you know that the issue of farmers' agitation demanding repealing of three farm laws passed by the Centre is agitating the country. Farmers from Punjab, Haryana and Uttar Pradesh have been sitting on dharna on the borders of Delhi for more than two months. We have been told that the water supply and electricity to the farmers' tents have been disconnected. Internet services stopped; portable toilets have been taken away."

The government has taken a repressive attitude towards the farmers in order to stifle their agitation, they said in the letter.

"The farmers' issue was raised in Parliament and Opposition parties have demanded a separate discussion on the farmers' agitation which the government has not agreed to so far. We have been receiving messages from the agitating farmers about their plight and pathetic condition, especially of women and children," the letter said.

"All of us went to the Ghazipur border in a bus," said the MPs, adding, "We wanted to physically meet the farmers...The police officers who were present at the border rudely asked us to turn back, showing that there were prohibitory orders."

"We stayed on for some time, trying to persuade the police to let us go ahead. But ultimately we failed and came back after an hour. The impression we got at the Delhi-Ghazipur border is like the border between India and Pakistan," it added.

The leaders informed through the letter that the condition of the farmers resembled that of the prisoners in a jail.

"Are we living in a police state where elected representatives of the people cannot meet farmers' representatives? We strongly protest the action of Delhi Police in preventing us from meeting the agitating farmers at Delhi borders. We would like the farmers' issues be raised in Parliament as also the attitude of the Delhi Police, which is under the Union Home Ministry," the MPs said in the letter. – IANS 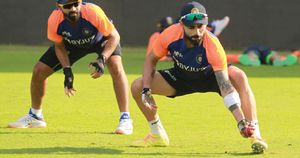 Focus is on England series not WTC final: Kohli