A fearful drama, having the potential to climax into a tragedy, is being played out in the eastern corner of the country. Two personnel of the Quippo Oil and Gas Infrastructure Limited Company, drilling superintendent Pranab Kumar Gogoi and radio operator Ram Kumar, were kidnapped by the United Liberation Front of Assam-Independent {ULFA (I)} insurgents on December 21 from the Kumchaikha hydrocarbon drilling site in Changlang, Arunachal Pradesh. Quippo, a Gurugram-based company, which provides onshore drilling services, had been outsourced by the Oil India Limited (OIL) for drilling operations in Arunachal to try and locate new crude reserves. The ULFA (I) had demanded Rs 20 crore ransom money and set a deadline of February 16 for the amount to be paid, while threatening to execute the hostages if this was not done. Entire Northeast waited with bated breath as the deadline passed, but, fortunately, the ULFA (I) has extended it by another week, and there is still a possibility that the impending tragedy might be averted. It is surprising that the various entities which should have been working towards securing the release of the unfortunate hostages, if indeed they have been engaged in the same, were doing so secretively. The public in general had remained unaware if negotiations were actually being carried out, and if these had been left only to the company, or State and Central government agencies were involved.

The sober truth is that two months have been allowed to lapse without any real progress in the ‘negotiations’, and it is only now, after passing of the first deadline, that the company seems to have been prodded into frantic activity to secure the hostages’ release! Ominously, the statement announcing the prolongation of the deadline was also issued on behalf of the banned National Socialist Council of Nagaland (NSCN), though it was undersigned by Rumel Asom, a member of ULFA (I)’s publicity wing. Also, security forces suspect that the hostages were being held somewhere in Myanmar at a base camp of the United National Liberation Front of Western Southeast Asia. All these point to the possibility that the decision on the hostages will not vest with the ULFA (I) alone. It may be noted that the chorus of condemnation, and fervent appeals to release the two technicians on humanitarian grounds, made by intellectuals and innumerable individuals on the social media, has been directed only towards the ‘commander-in-chief’ of the ULFA (I), Paresh Barua. But the presence of other stakeholders in the kidnapping incident perhaps indicates that the outcome would depend less on fervent appeals by family members or the public, and more on the success of the negotiations. With just a few days left for the second deadline to expire, the collective wish of the entire Northeast is that the two innocent victims are released unharmed. 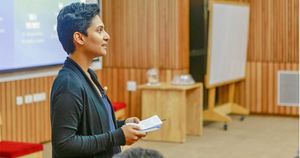 The science of communication