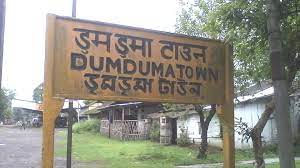 The meeting was presided over by the president of Doomdooma regional committee of AJYCP Prabhakar Sarmah and was attended by various district-level office-bearers of the organisation, including its district president Surajit Moran.

Participating in the discussion, citizens from various walks of life and representatives of different ethnic and socio-cultural organisations and educational institutions were unanimous in demanding subdivisional status for Doomdooma.

Several speakers stated that while places having smaller area and population have been upgraded to subdivisions or districts, it is unfair on the part of the government to deprive Doomdooma, which is inhabited predominantly by the tea tribes and people belonging to other backward classes.

The citizens’ meet also demanded piped gas supply to the households of Doomdooma and adjoining areas and completion of water supply project of the town.

It was further resolved that a memorandum prepared on behalf of the citizens’ meet would be submitted to the Chief Minister and departments concerned, apart from the MLAs of five constituencies of Tinsukia district and the MP of Lakhimpur parliamentary constituency. Modi to visit Dhekiajuli on Feb 7