As a girl grows up, society cages her in many ways.

I consider myself very fortunate to have been born into a family of two girls, where gender bias was never an issue. My parents never imposed any restrictions upon us and simply expected us to grow up to be good human beings. However, everyone is not as lucky as I am.

Even though every human being comes to this world as an empowered entity, with no implicit bias imprinted, societal norms start to act and programme it to function and to behave in a certain manner according to its gender.

As a girl grows up, the society starts imposing its restrictions on her, and it starts determining boundaries and setting expectations for her. This eventually strips the girl of her self-worth, and turns her into a meek and submissive individual.

"How high would a woman be able to rise in her field if she were to do everything on her own? How far would she go if she has only herself for support? Like everyone else, a woman too needs support to be successful. She’s no 'Wonder-Woman' from a superhero movie. She doesn’t want to be a Durga with ten hands. She’s only human after all!"

The saddest part is that the woman herself comes to believe and accept that she is a weakling, incapable of achieving anything significant in life. The situation of the woman in our society is pretty much like the bird which has been kept in a cage for years and whose wings have been clipped, thus making it incapable of flight.

I do appreciate the fact that men and women are not equal; neither are they inferior or superior to each other. I believe they are unique in their own ways; they have their own strengths and weaknesses, and they should respect and support each other to bring out the best in each. Many initiatives are being taken to change the plight of women in our country. But these are not yielding the desired results; probably because they have failed to address certain root causes of the problem.

The woman empowerment programmes in our country are focussing on making our women strong and self-reliant -- which is definitely praiseworthy. However, I feel this alone will not suffice. How high would a woman be able to rise in her field if she were to do everything on her own? How far would she go if she has only herself for support? Like everyone else, a woman too needs support to be successful. She is no ‘Wonder-Woman' from a superhero movie. She doesn’t want to be a Durga with ten hands. She’s only human after all!

Have we ever pondered why we see more successful men than women in the society? Have we ever given a thought as to why a man is able to continue his career unhindered after fatherhood, while a woman’s career often takes a nosedive after motherhood? Is it because men are naturally smarter than women? Definitely not.

The answer does not lie in the gender difference, but it’s in the support system. The man gets the support of his wife, which enables him to continue to focus on his job and climb up the career ladder even after becoming a father.  However, the same is not true for the woman. Society has programmed her and her husband alike into believing that household work and childcare are women’s jobs. This belief propels a woman to try to juggle between home and work after becoming a mother, which eventually causes her career to falter. Even though some women might have managed to break free of this notion, the men are often found to be still stuck in the rut, thus making things difficult for her.

Due to lack of support, many women are even choosing not to marry, or not to have babies. Whether she wants to marry or wants to have a kid or not is completely her prerogative. But if a woman is compelled to take such a decision owing to lack of support, it is really unfortunate.

If a man can enjoy fatherhood as well as a successful career, why can’t a woman?  It’s high time that society changes its mindset and accepts, as well as promotes, the fact that household work and childcare is a shared responsibility.

It would be a positive trend to see big corporations investing in setting up good, trustworthy and affordable daycare centres – so that the parents may focus on work without having to worry about the safety and wellbeing of their kids. There has been a mushrooming of so-called daycare facilities in our country, but in the absence of specific guidelines, the standards of care are uneven and inadequate.

Society cannot be complacent by playing the role of just a cheerleader – telling the girls to grow and be self-sufficient. It must play an active, participatory role in making this world a more conducive place for the growth and progress of our girls and become the wind beneath their wings. 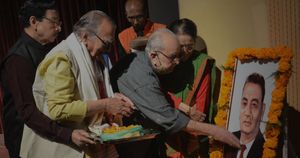