Croatian Dodig and Slovakian Polasek beat Ram and Salisbury 6-3 6-4 winners at Rod Laver Arena, not facing a breakpoint and constantly applying pressure on their higher-seeded opponents.

It had to be particularly special for Polasek, who came out of retirement in 2018 after a back issue led to leg problems and forced him out of the game. Two days ago, his partner gave birth to their second child, a daughter.

Polasek served out the contest with ease. He was the lone player of the quartet on the court not to have lifted a Grand Slam trophy in men's doubles.

Ram and Salisbury were foiled in their bid to become the first repeat men's doubles winners since Bob and Mike Bryan tallied three in a row from 2009-11. 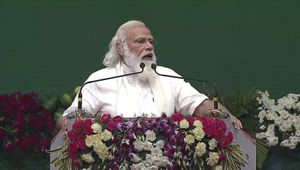 It is always special to be in Assam: Modi