VAGRANT WORDS - The pattern of a falling leaf

Twelve more leaves in 30 seconds, one after the other, falling with parachutes’ ease, sky-drifting from heaven to earth and perhaps into another fold meant for a fire or a bonfire, or for giving life to another through compost, they lay there on the paved cemented compound, gathered close to one another. You waited as the seconds ticked by and climbed to a minute, then another, but there were no more leaves falling, with whatever agency that had guided them...

You could have sworn that there was neither any wind nor any breeze nor any momentary draft.  But as if plucked by an unseen hand one after the other the leaves from the mango tree a few feet away from where you sat swirled down to the ground below.

The first one, dry, stiff and curled up, neither brown nor green but a kind of grey that bothered you because you could not define the exact colour, fell slowly, everlastingly, with the rest of the universe standing at attention, as if this act was all that mattered, this act separating a tender once rich-green oval-shaped leaf clinging from the tree with which it had remained through the long summer days and then the chilly winter months, through rain and dust and the time when frantic hands had shaken the tree’s limbs for the ripe and the half-ripe mangoes that grew in riotous, almost abandoned plenty.

It took its time falling, somersaulting twice in the pale February air, desperate in a final attempt at fighting gravity, drifting down that long never-to-be-repeated journey and then, lazily, as if aware of its inevitable end, it struck the ground soundlessly, spine half-bent and legs drawn-up and rolling like a gymnast on a mat. It tottered lazily, helplessly, without any sound, like a heart-broken man sighing before giving up to sleep forever on his hallowed final resting ground.

You saw then the curved stiff rib cage and the wrinkled tiny veins that spread out like a spider’s web from the tip to the base where the leaf had once remained attached to the branch. It had gone as quiet as eternity and as soundless as a once restless atom now tired beyond measure. Yes, it was still and quiet, that breathless quiet following a prayer before going to bed for the night, that pulsating quiet half a second before a penalty shot in a football match.

It was so still that for a moment you thought it couldn’t be real. There is no such thing as absolute stillness. There is always motion, continuous motion, always. Yet it was still, as still as it could get even as you knew that there can only be one such stillness, only with the One. Even as you knew that there was no reason to ponder over a matter as insignificant as a falling mango leaf, that there was no reason to invoke the One for assisting you for a three-second description such as this.

And then it was broken, this stillness, as yet another leaf made its wavy dreamlike journey from one of the branches in almost the same manner and pattern as the one before. It glided down softly – caressing the air, weaving like a dust mote floating in a slanted sun-ray inside a room, a flake as delicate and tender and transitory as your life or mine. It rolled through that three-second journey and then without your having to justify it or read too many things into it, you knew that it had come seeking its life-long companion, resting close to the one that had fallen but a few seconds ago. There was nothing dramatic or romantic about what you were thinking, nor was there any sentiment that could be called maudlin. All that you could then think of was that maybe it could be a parallel. Of one kind of existence with that of another. In different shapes. In a somewhat but not entirely different context. Of your own world and your own understanding of it with that of a leaf. A leaf that had once been green, rich, vibrant, a leaf sucking in sunlight and raindrops and giving you all the pleasure you required while breathing.

Twelve more leaves in 30 seconds, one after the other, falling with parachutes’ ease, sky-drifting from heaven to earth and perhaps into another fold meant for a fire or a bonfire, or for giving life to another through compost, they lay there on the paved cemented compound, gathered close to one another. You waited as the seconds ticked by and climbed to a minute, then another, but there were no more leaves falling, with whatever agency that had guided them to where they now lay, having left for perhaps another tree, another place. Yes, you were sure, quite sure there was no wind, no draft. But there had been an agent, a force, you knew not what, but a force all the same.

From across the road two doves flew over to the mango tree, settled on a branch and cooed. There were several other mango trees as well as coconut palms in the garden but it was on this tree that the doves now settled. For several seconds the pair continued with their cooing, the sound trilling throughout the neighbourhood and then, simultaneously, the birds flew down to where the leaves lay in peaceful immobility.

The wings fanned the air, the leaves now suddenly coming to life, like tired old persons helplessly dancing because they are forced to and then just as suddenly the birds had flown off. You tried not to read meanings but as you got up and looked at the 12 fallen leaves, you saw that they had turned a brilliant golden hue under the morning sun.

The writer is a novelist, short-story writer and a former member of the IAS. 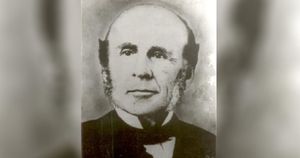 YESTERDAY ONCE MORE - A milestone in journalism