KAMAKHYA NARAYAN SINGH has built a compelling narrative around sanitation.

Born and brought up in Guwahati, Kamakhya Narayan Singh has toured the world to tell the stories of life, travel and culture over the years. Though he has never been to a film school, Singh knows his craft of storytelling pretty well. His first feature film as a director is Bhor (Dawn) – based in rural Bihar and is about sanitisation and women empowerment. Now it’s out in the digital streaming platform MX player.

Though several attempts have been made to raise the issue on screen, Singh has kept it as real as it can be. The film revolves around Budhni, a girl from the Musahar community in Bihar who dreams of pursuing her education despite being married off, and how she fights all odds to build a toilet in her house. The film has an ensemble cast of Nalneesh Neel, Devesh Rajan, Saveri Sree Gaur and Punya Prasun Bajpai. Bhor is produced by A.K. Singh of Gyanesh Films and is helmed by Kamakhya Narayan Singh.

During a conversation, Singh shared his experience with The Assam Tribune.

Why did you want to make a film on sanitisation?

For the last eight to nine months, the government has been discussing sanitisation. Even before the BJP came to power, the Congress Government kept on talking about building toilets. And when the Modi Government came in, they started a movement out of it.

And I personally wondered how the last man in the country would take on the toilet when it reaches his house. And I feel the Musahars are the last people… as development has not yet reached them. So, I wanted to build a narrative around that. And also, I think, we have stopped making films on rural India in the last ten years, at least in mainstream Bollywood. That’s why I wanted to do this.

You have been able to narrate the story in such a way – it’s so real, like a documentary. How has your experience been during the making of the film?

As a documentary filmmaker, I wanted my characters, set and everything to look as real as possible. We tried our best to do it, though it was a little difficult. I have chosen a subject about the lives of the Musahars… about a girl living in a rural community.

Creating a set was difficult in such conditions. So, we went to the village and shot in the real houses. And when we were working on the costumes, I felt that it should be realistic. My costume designers from Bombay wanted to make the clothes look worn-out, so they wanted to dip them in tea water. But I decided otherwise and started borrowing clothes from the villagers. It took me around 15 to 20 days to convince the villagers. It was also difficult to convince the actors, especially the known faces to stay with me for two months. So, most of them are newcomers. Though it was tough, it was satisfying at the same time.

You said you did a two-month workshop there to get it as real as it can be. How was the support and association of the locals? Do the people realise the importance of the issue?

We went to the village with the whole unit of new actors. Initially, it took us at least two weeks’ time and once they were convinced, they were very cooperative. They left their houses for the entire day so that our actors could use them.

They would teach us the local dialect and how to work in the field or tend to the animals. This film would not have been possible without the help of the locals.

Unfortunately, however, open defecation is still going on among the Musahar communities in the villages where we shot the film. The government has set up some toilets but the villagers are not using these.

So, sensitisation and awareness is also important at the same time. I think my film will help in this regard.

Wherever the film has gone, I have received a standing ovation. The critics have spoken highly about it. In most places, the film has been screened twice on the demand of viewers.

As a first-time filmmaker, you tend to get nervous but when you go to the festivals and get this kind of response, your confidence level goes high. And then you get the confidence and courage to go for the release of the film.

Did you get an opportunity to screen the film in Bihar? If yes, how was the experience?

We got a standing ovation there and we had an interactive session which went on for more than an hour. I still get messages from these people. It’s a huge feeling when people can relate to the idea you are trying to put across.

Tell us about your initial days in Assam.

I was born and brought up in Guwahati. The environment and the senses through which I grew up helped in shaping me as an artist. Figures like Bishnu Prasad Rabha, Jyotiprasad Agarwala or Bhupen Hazarika – have influenced my work. Since childhood, in Assamese society, you are taught art and culture. That remained with me wherever I went. I may be in Delhi or Bombay but that essence of Assamese culture remained and grew stronger. 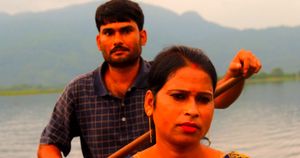