With the inauguration of the mass inoculation drive by Prime Minister Narendra Modi, India has taken the first steps towards ending the Covid-19 pandemic which has afflicted over a million and a half of the population and killed around a lakh and a half. These are only official figures and observers believe that the unofficial figures in a vast and overpopulated nation like India would be much more. Even those not directly afflicted have not remained untouched by the havoc wrought by this novel coronavirus, since it has devastated the economy and caused job losses to millions. But now, with the commencement of the vaccination drive, the end of the tunnel appears to be in sight for the nation, though there is some way to go yet to actually heave a sigh of relief. According to the Health Ministry, on the first day 1,91,181 healthcare and frontline workers, during 3,352 sessions conducted by 16,755 vaccinators across the nation, were vaccinated last Saturday. Apart from healthcare and frontline workers, additional 3,429 beneficiaries were inoculated with Covid-19 vaccines in Defence institutions, including the Indian Army and the Indian Navy. This is as it should be, for these are the segments who risk their lives to protect the Indian people, and should be prioritized. Two Covid-19 vaccines were used, one being Covishield, developed by Oxford-AstraZeneca and manufactured by Pune’s Serum Institute.

Controversy has broken out with regards to the second vaccine, Covaxin, developed by Hyderabad-based Bharat Biotech. This vaccine is undergoing third phase trials, and confirmed efficacy data for it has not been released. It has been cleared for emergency use based on phase one and two results, in consideration of the urgent need to vaccinate as many people as quickly as possible to attain herd immunity required to contain the pandemic. In doing so India has emulated the example set by China and Russia which are well on their way to mass vaccination of their citizens without acquiring Phase III results of their vaccines. However, vaccination with Covaxin would be on a voluntary basis, and while reassuring the public on its safety and efficacy, Bharat Biotech has stated that it will pay compensation to any beneficiary who faces serious adverse after-effects. Admittedly, with India planning to inoculate nearly 30 crore people with two doses of the Covid-19 vaccines in the first six months of 2021, the infrastructure created will have to be augmented. Meanwhile, authorities need to closely track domestic production and delivery schedules of the two Indian vaccine manufacturers so that these are commensurate with requirement, given that the European nations are facing shortage of the Pfizer and Moderna vaccines they are using. Though India has many miles to go on the vaccination front it has been an excellent start and the Health Ministry must be congratulated for this. 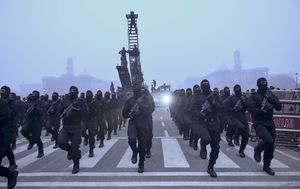 A contingent of the National Security Guard practises during the rehearsals for the Republic Day Parade 2021, at Rajpath in New Delhi on Sunday. – PTI