Tracing The Origin Of Magh Bihu

For the people of Assam, irrespective of caste, class, community and religions, the folk festival of Bihu has a special significance. Although, there is no history of the birth of Bihu, yet the popular belief suggests that ‘Bihu is as old as the mighty river Brahmaputra’. The folk songs and intricacies of the Bihu dance establish the fact that Bihu finds existence from the time when people started tilling the earth for sustenance. Moreover, the terms, traditions and rituals associated with it indicate that Bihu reflects the blend of colourful cultures of different communities, especially the tribes living in the region since time immemorial.

There are several views on the origin of the word Bihu. Some find the origin of the Bihu in Deori word Bisu, which means ‘excessive joy’. The indigenous group of tribes- Chutias, SonowalKacharis, Thengal-Kacharis, Morans, Deoris and Motoks, which were known as SadiyalKacharis, started celebrating the festival of Bihu under the patronage of their rulers in Sadiya kingdom. The other branch of tribes- Bodo-Kacharis, including the Bodo, Dimasa, Rabha and Tiwa, have the tradition of celebrating Bihu since ancient times. The Bodo people called it Baisagu, while the Dimasa, Tiwa and Rabha call it Bushu or Bushu Dima, Pisu, Dumsi respectively. The arrival of Indo-Aryans, who related the word Bihu with Bishuv or Visuvan. Later, their Sanskritisation process helped to evolve Bihu into its present form.  Of the three Bihus, Magh Bihu has special significance in the lives of Assamese people.

Whether call it as Magh Bihu or Bhogali Bihu, Magi in Bodo, Maghyo Bihu in Deori, Maghe Sankranti among the Nepalis or by any other names, the festival of worshipping fire and celebrating with community feast is the expression of ecstasy and successful harvest of the peasant society of the region.

The celebration of Magh Bihu or Bhogali Bihu, which starts with Uruka or the eve of the Bihu, has a social and cultural significance among the old and young generations of Assamese people. The word-Uruka is believed to be derived from the Deori-Chutia word Urukuwa, which means ‘to end’, the end of the harvesting season. The traditions of Uruka are more or less similar among the native tribal and non-tribal population of the state.

Meji and Bhelaghar- two inseparable words in the celebration of Bhogali or Magh Bihu, have special significance in the harvest festival of the Assamese people. The Meji burning starts the post-harvesting ceremony of Magh Bihu. The tradition of a bonfire on Uruka and burning of Meji can be connected with the Fire-Worship tradition of the agrarian society of human civilisation.

There are several claims on the origin of the word Meji. Some believe the Deori-Chutia word ‘Midi-ye-ji’, where ‘Midi’ stands for ‘Ancestral gods’, ‘Ye’ means ‘Fire’ and ‘Ji’ denotes ‘Flyaway’, is the origin of the word Meji. The three words - ‘Midi’, ‘Ye’ and ‘Ji’ together suggest the reverence for the ancestral spirits that fly away with the fire.

Some find Sanskrit word ‘Medhya’ as the origin of the word- Meji. There is no concrete evidence of when and how the rituals of burning Meji began, yet we can relate the culture of bonfire with fertility rites, nature and fire worship. There are arguments to believe that Meji burning tradition is closely connected to the pagan belief system and Hindu Vedic concept of worshipping Agni, the god of the sacrificial fire.

The term-Bhelaghar may have its origin from ‘Mesa-griha’, where ‘mesa’ (mesa= bhera/bhela=sheep) means sheep. Some find its origin from Sanskrit word ‘Megh-Griha'. Even though there is no historical evidence of celebrating a feast in Bhelaghar made of bamboo sticks, haystack, dry leaves of banana and thatch in a paddy field or open area, but the folk songs remind us of its existence since ancient times. However, the traditions and rituals that the festival of Bhogali Bihu, Meji and Bhelaghar have been ingrained with Arya-Mongolian rituals. It inherits the folk cultures of our ancestors and the customs of varied tribal groups of the region.

Magh Bihu’s Meji and Bhelaghar have similarities with Dekasang, which used to be the house of primitive people or tribal people of the region. Birinchi Kumar Barua, the noted folklorist, scholar, novelist, playwright and historian, stated that Bhelaghar reminded him of little memory of Dekasang. The tradition of spending the whole night and enjoying feast has been a significant part of the tribes of Assam. However, Meji and Bhelaghar hold different names among the tribes of the region.

The Mising, one of the significant and predominantly riverine tribes, prepares Meji to worship the fire-god.  They follow traditional rules from the time of erecting the Meji to the day of burning it down. The Tiwa community, the ethnic tribe of the North East, offers prayer with betel nuts, leaf and token of money before beginning the preparation of Meji.

While tracing the origin Magh Bihu, Meji, Bhelaghar and the traditions of celebrating the festival, we may not reach a general consensus, but it made us realise and understand the fact that the fire of Meji symbolises annihilation and regeneration. It is a symbol of light, warmth and positivity that the traditions of the festival bring to our minds and society.


The writer, Manash P Goswami, is currently working as an Associate Professor in the Department of Media and Communication, Central University of Tamil Nadu, Thiruvarur. Readers can reach him at [email protected]. 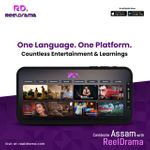