Thanks to the upcoming election in Assam, the development issues of tea tribes is in the news and has received some attention. For one, the Finance Minister made a budget allocation of Rs.1000 crore for the welfare of tea workers in Assam and West Bengal. Prime Minister Narendra Modi in an election rally in early February at Sonitpur, Assam, said that those who were out to malign India’s image also wanted to “systematically” attack Indian tea. India’s tea has been “systematically” attacked, but not by external forces. Systemic weaknesses in the Assam tea industry, the plight of tea garden workers in Assam are all manifestations of the joint failure of the market, State and civil society.

There are three systemic weaknesses in the tea ecosystem in Assam that require urgent attention from the government. First, Assam’s tea industry is mostly confined to the tea supply chain’s unremunerative plantation activities. In the tea value chain, value addition such as blending, packaging, and even more lucrative marketing takes place outside the State. An ILO-funded study observes that 53 percent of the profit from tea goes to the retailer, 33 to the blender, 7 to the factory, 6 to buyer/agent, 1 to the tea auctioneer/broker, and a mere 0.16% to the tea plucker.Tea corporates engaged in plantation activities have not evolved with time. They lack innovation and imagination, evident in the colonial-stylepractices that are still followed in human resources, labour management and outdated production technology. A plantation manager has to oversee tea planting and related activities like pruning, ‘tea making’ in the factory and the management of an entire community of workers, their families, schools, ration, health centres etc. In such a context, it provides little room for management in the plantation to innovate or maybe that is the reason for lingering colonial practices like Bichaar Din, where the plantation management ridiculously resolves household conflicts.

Second, the tea garden workers are a marginalised community. Tea plantations come under the Plantation Labour Act (PLA), 1951, which requires the tea company to provide several social benefits apart from wages. Tea companies in Assam, therefore, raise concerns about the high labour cost of producing tea which is roughly sixty per cent of the total cost of production. To bring down the social cost borne by them, the companies call for cost-sharing between government agencies and the tea company to make the sector competitive. Several studies, however, show that very few tea plantations fully implement the welfare schemes guaranteed under the Plantation Labour Act (1951) (such as housing, medical facilities, schools, creches etc.), while the State turns a blind eye to such violations.

Tea garden workers in Assam are not covered under the Minimum Wages Act, and their earning is INR 167, i.e., 58 per cent of the minimum wage in India. The wages were even lower earlier, around Rs.54 in 2006-7 for plucking 21 kgs of tea leaves. This, however, started changing gradually with alternative labour opportunities expanding in the tea garden areas due to MNREGA and support programs for small tea growers. As a poll sop, the government by an order dated February 23, 2021 has increased the daily wage by an interim amount of Rs. 50 per day without addressing conditions like high social cost and low productivity that have sustained low wages in the Assam tea industry. Sops such as these without addressing the accompanying factors may worsen the already ailing Assam tea industry and negatively impact its long term competitiveness and viability.

Low development indicators of Assam and more than that the abysmal condition of tea tribes reflect the systemic weaknesses. The community is among the most marginalised in the State. This is evident because the tea workers are still considered ‘outsiders’ and denied affirmative action benefits in a State where they have lived for more than 150 years. The community constitutes 20 per cent of the population and is the backbone of this industry, and one of the State’s main revenue generators, yet it remains the most marginalised!

The community fares poorly on all development parameters. To highlight a few: relative to the national average and even average of the state of Assam, more tea garden children drop out from schools (Save the Children, 2017), more of them are underweight, more adolescent girls are anaemic (NFHS), more young mothers die in Assam’s tea gardens, the maternal mortality rate in the tea gardens of Upper Assam is 404, which is even higher than some of the Sub Saharan African countries such as Burkina Faso, Togo and Uganda (NFHS and World Bank, 2013). 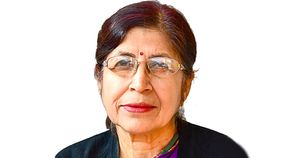