‘Spl court to expedite settlement of cases against NDFB cadres’

In reply to the media, the Minister said his government is going to set up a special court to expedite the pending cases of all the four factions of National Democratic Front of Boroland (NDFB) and it will appeal to the court to withdraw their cases through first track proceeding.

He also told the media that peace talks have been resumed with Adivasi and Karbi militant groups and it is expected that it will bring positive results very soon.

BTC Executive Member Ranjit Basumatary told the media that when Pramod Boro became the leader of All Bodo Students’ Union (ABSU) in 2006, since then they have been demanding quality education for the students of BTC’s northern-most region. But successive governments did not respond to the call. Now Boro is the chief of the council and this long-pending demand is going to be fulfilled, Basumatary said.

He also expressed displeasure over a section of opportunist government officials who are working in the council on behalf of outgoing Bodoland People’s Front (BPF) and made it clear before the media that they would no longer be allowed to continue with such mentality because the UPPL will not move away from their commitment, he added.

On the other hand, James Basumatary, the sitting BTC member elected from BPF for Nichima Council seat, complained before the media that he was not invited by the administration to the foundation stone-laying ceremony of the college yesterday.

He attended the ceremony as a Council local member on his own discretion and for the greater interest of his area in which the college is going to set up. Being a BTC member from the Opposition party, he has been neglected by the ruling UPPL-BJP-GSP alliance, Basumatary alleged. 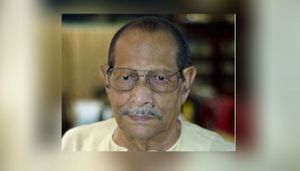