NEW DELHI, Jan 17: Prime Minister Narendra Modi on Sunday paid tributes to AIADMK founder and former Tamil Nadu chief minister MG Ramachandran on his birth anniversary and lauded his efforts towards poverty alleviation and emphasis on women empowerment. Born in 1917, MGR, as he became popularly known, was a Tamil film superstar who joined the CN Annadurai-led DMK and rose to be one of its popular faces. He formed his own party in 1972 following differences with M Karunanidhi, the then DMK chief after Annadurai’s death. “Bharat Ratna MGR lives in the hearts of several people. Be it the world of films or politics, he was widely respected,” Modi tweeted. “During his CM tenures, he initiated numerous efforts towards poverty alleviation and also emphasised on women empowerment. Tributes to MGR on his Jayanti,” the prime minister said. As chief minister for over 10 years after leading his party to victory for three consecutive terms till his death in 1987, MGR is credited with popularising several welfare programmes, including mid-day meal scheme, in the state. – PTI

ERODE, Jan 17: A wild elephant trampled to death a farmer and injured another while they were guarding their tapioca crop in Kadambur Athiyur village in the district, forest officials said on Sunday. The incident happened on Friday midnight. Periyasamy (46) and Sadaiyappan (50) were standing guard when the animal entered their land, the officials said. On seeing the elephant, the two burst fire-crackers to scare the animal away, but it attacked the men. Both sustained injuries and Sadaiyappan managed to escape. The elephant trampled Periyasamy to death and left, they said. On Saturday morning, the villagers conveyed the information to the forest officials, who visited the spot. Sadaiyappan is undergoing treatment in the Government Hospital, Sathyamangalam, they said. – PTI

RAIPUR, Jan 17: Troops of the Indo-Tibetan Border Police (ITBP) have launched an internet tools-based learning centre for school-going children in a Naxal violence affected district of Chhattisgarh, officials said on Sunday. The smart school is located in Hadeli village of Kondagaon district and has about 50 children who are taught by the force personnel with the help of YouTube videos and other online education portals. The Kondagaon district headquarters, in the southern part of the central Indian state, is over 210 km from state capital Raipur. The classes are organised daily by using internet-enabled phones of the jawans. As the mobile signal is weak, jawans put their mobiles at a height through bamboo poles and the network is connected through WiFi hotspot facility to the laptop, a senior ITBP officer said. The screen is enlarged on a wall for the children through a projector. The classes are usually held in the evening and personnel who are graduates and are trained to hold school education sessions are deputed, he said. The children are also shown animation movies and basic learning videos during these sessions, the officer said. The troops of the 41st ITBP battalion, posted in the district as part of the anti-Maoist operations grid, are also learning the local Halbi dialect from these children, he said. – PTI

MUMBAI, Jan 17: As India kickstarted the world’s largest vaccination drive against coronavirus over the weekend, megastar Amitabh Bachchan says he is hopeful that the country will become COVID-19 free. The 78-year-old actor on Sunday said people of India will eliminate coronavirus from the country like polio. “It was a proud moment when we made India polio free;  it shall be just as proud a moment when we make India COVID-19  free  #LargestVaccineDrive @MoHFW_India @UNICEFIndia #largestVaccinationdrive JAI HIND,” Bachchan, who was the UNICEF goodwill ambassador for the polio eradication campaign in India, posted on Twitter. The star fronted UNICEF’s campaign till the country became polio free in 2014. Bachchan was also roped in by the central government to make people aware of preventive measures to fight COVID-19 via a caller tune. The actor, who tested positive for the virus in July last year and recovered in over two weeks, has been actively spreading the word on coronavirus on social media since the pandemic hit the country. Bachchan has also been supporting and promoting campaigns related to tuberculosis-free India, childhood immunisation and Clean India. – PTI 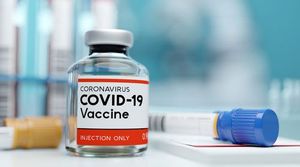 Will Poor Get COVID-19 Vaccine For Free, Asks Congress