But first things first – after 14 days in quarantine because of the COVID-19 pandemic regulations in Australia, the 23-time Grand Slam singles champion took her daughter to the zoo.

Williams said she had been crossing off the 14 days of quarantine on a calendar, having spent the time with her three-year-old daughter Olympia.
“We went to the zoo,” Williams said of her first movements outside of quarantine. “I am so glad it’s over because to be in a room with a three-year-old and being her best friend is definitely difficult, especially after training and working out. Honestly, I wouldn’t trade anything, spending hours and hours and hours with her was really fun.”

Williams’ match against Osaka will be a reprise of their controversial 2018 US Open final. Osaka beat Williams 6-2, 6-4 to claim her first major title but the match was most remembered for Williams’ verbal altercations with chair umpire Carlos Ramos.

In the opening match on Friday at Adelaide, top-ranked Novak Djokovic missed the start of his scheduled exhibition match against emerging Italian talent Jannick Sinner, who was Rafael Nadal’s quarantine practice partner.
Djokovic got treatment for a blister on his right hand, leaving Sinner to play Filip Krajinovic, but the eight-time Australian Open champion arrived on court at the start of the second set to cheers from the crowd.

Krajinovic won the first set 6-3 and Djokovic the second by the same score to give the Serbian tag-team victory.

“I am sorry that I didn’t step on the court from the beginning, I had to do some treatment with my physio,” Djokovic told the crowd in a post-match interview. “I wanted to play, I wanted to get out there.” A television close-up had earlier showed a large blister on the palm of his right hand, where his racket would sit.
“It’s part of what we do, we learn over the years to play with the pain,” Djokovic said. “But I saw the crowd and the emotion was so strong for me to come out, I had to play.”

A few hours earlier, Djokovic, who has already had COVID-19, celebrated the end of his quarantine with a barefoot walk in a local park. “Just putting bare feet on the ground,” he said. “Just doing something that I didn’t have a chance to do. So just having space, that is what we all kind of missed.” – AP 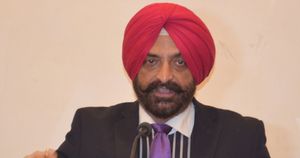