A quarter of known bee species in the wild haven’t appeared in public records since the 1990s, a concerning new study reveals.

Argentinian researchers used a publicly available database on specimen collections and observations, complemented by citizen-science efforts. Despite a large increase in the number of records available, 25 per cent fewer species were reported between 2006 and 2015 than before the 1990s, they found.

While this could indicate that these species have become too rare to be found in their natural habitats, many, if not all, may be extinct. Bees are affected by climate change, pesticides and pathogens, low genetic diversity, and habitat loss and fragmentation from intensive farming.

Wild bee pollination is fundamental to the reproduction of thousands of wild plant species and is key to securing yields in about 85 per cent of our food crops. “Something is happening to the bees, and something needs to be done,” said study author Eduardo Zattara at CONICET-Universidad Nacional del Comahue in Argentina. “With citizen science and the ability to share data, records are going up exponentially, but the number of species reported in these records is going down. It’s not a bee cataclysm yet, but what we can say is that wild bees are not exactly thriving.”

Researchers are interested in identifying more general, global trends in bee diversity. Bee species in the records were taken from multiple families, including apidae, of which bumblebees, honey bees, stingless bees, and carpenter bees are types, among many others.

Other bee families include megachilidae (which includes leafcutter bees), halictidae (known as sweat bees because they’re often attracted to perspiration), andrenidae (commonly known as mining bees), and the rare melittidae family. “Figuring out which species is living where, and how each population is doing, using complex aggregated datasets can be very messy,” said Zattara. “We wanted to ask a simpler question – what species have been recorded, anywhere in the world, in a given period?”

Researchers looked at the Global Biodiversity Information Facility (GBIF), an international network of databases, which contains over three centuries’ worth of records from museums, universities, and private citizens. GBIF accounts for more than 20,000 known bee species from around the world.

In addition to finding that a quarter of total bee species are no longer being recorded, researchers observed that this decline is not evenly distributed among bee families. Records of halictid bees – the second most common family – have declined by 17 per cent since the 1990s. Those for melittidae – a small and much rarer family – have gone down by as much as 41 per cent. The team highlighted how species such as the giant Patagonian bumblebee are ‘now an uncommon sight’.

Increasing dominance by one or a few species can be observed at the regional scale, like the case of the western honeybee in the Mediterranean. Despite this, loss of other bee species is a blow to science. 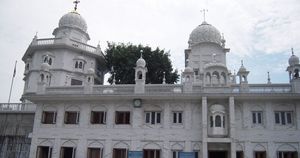