On a fine Christmas morning in North America in 1900, a group of 27 dedicated birders came together to do something unprecedented. They were out to create a new Christmas tradition defying the customary Christmas ‘side hunt’, which involved hunting of feathered or furred quarry. Inspired by Franklin M Chapman, an ornithologist from the then nascent Audubon Society, they proposed that instead of hunting, people should count the birds during the holidays and named this pursuit as the ‘Christmas bird census’. On the very first day, 25 bird counts held across parts of North America by a group of 27 birders tallied around 90 species of birds. This unique quest, which had sprung from concerns over declining bird populations, continues today as a popular activity each year with tens of thousands of volunteers taking part throughout America. The data collected by them has been utilized by Audubon researchers, conservation biologists, wildlife agencies and other interested individuals to study the long-term health and status of bird populations across North America, and even to understand how climate change could affect the ranges of 588 North American birds. What started as a new holiday tradition now brings people closer to nature while providing a platform for scientific research using crowd-sourced data.

The Christmas bird count is one of the first initiatives among what is now popularly known as ‘Citizen Science’: any project or activity engaging the general public, including non-scientists, in scientific research. Such citizen scientists can now actually contribute to science with their intellectual efforts, data gathering and knowledge, or by providing tools and resources. These projects can engulf a wide range of activities including scientific, inspirational, educational, social, economic, historic, environmental and even political. The Christmas bird count, the Globe at Night database measuring impact of light pollution, and SeasonWatch from India are some of the many examples of citizen science projects. The functioning of these activities comprise interactions between citizen scientists, which may be globally far-reaching or may even be limited to local scales. These extensive degrees of interactions have led to such discoveries that might have not been achievable by a single scientist. Hence, millions of people are contributing a myriad of research, thus serving as the eyes and ears to the scientific community.

Even though it might sound a little complicated at first, citizen science can be as simple as clicking pictures of mountains or even a small little butterfly. In fact most citizen science projects are now available to people with just a few clicks on their phones, all one needs is an internet connection and, of course, the willingness to adopt a scientific temper. Websites and phone apps like eBird, SeasonWatch, Zooniverse have made it possible for people to contribute personal observations about their surroundings, including bird counts, or data on the species diversity of a particular region on a daily basis, from wherever they are. Citizen science projects have witnessed many success stories globally. For example, in 2017, a group of citizen scientists using data from NASA’s Kepler space telescope, led to the discovery of a system of at least five exoplanets.  Even in India, the concept of citizen science is now rapidly gaining recognition. Popular examples include projects such as SeasonWatch, which monitors phenology of plants, or biodiversity portals that document diversity of living organisms in our country. The Assam Biodiversity portal, which is used to gather and share biodiversity information of Assam, is an example of the latter. Recently, Vijay Anand Ismavel, a surgeon of Karimganj district, made a record by contributing 6,179 observations of different species of flora and fauna in this platform.

So why and how did citizen science gain such widespread popularity? Earlier, science conjured images of white lab coats, sterilized facilities, and sci-fi films, or at best, heavy textbooks with Latinized words, elaborate diagrams, and an earful of scientific jargon. However, today science is not just a profession, it can also be a hobby and with the emergence of various citizen science projects, science is now visible and accessible to all. Moreover, we live in an era where science is changing constantly, whereas the number of people involved in science is relatively small. The participation of citizen scientists comes as a boon because they can gather larger amounts of data and over wider areas than any single professional scientist or group of academicians. Further, as this field involves both amateurs and professionals, it has helped bridging this gap between science and society.

Gaining legitimacy for the copious amount of crowd-sourced data can, however, be challenging as there is a need to reduce errors and biases. Scientists all over the world have hence come up with various measures to trust the citizen science data. One such measure is validation of collected data by experts. In eBird, for example, a filtering system is used to cross-check every single species of bird reported in the portal. This is aided by a community of reviewers in each region who work with observers to validate records. Biodiversity portals, eBird, and iNaturalist also enable observers to upload photographs, sounds or videos as evidence, which can be verified by a community of observers to attain research grade data that is contributed to global repositories such as the Global Biodiversity Information Facility (GBIF).

Citizen science is also beginning to have measurable or significant impacts. These include new discoveries, informing policy, and assessing conservation status of species. For instance, the Status of Indian Birds report provides a record of about 10 million observations on the distribution range size of 867 Indian birds, and their trends in abundance in both the long term (over 25+ years) and currently (past 5 years). These observations uploaded to eBird by more than 15,500 bird watchers have been useful in drawing conservation attention towards species that were earlier considered to be common and widespread.

Citizen science is a field that has amazing potential to abate the growing distrust of people in science. However, even though citizen science has already gained widespread recognition, it still has a long way to go. We can certainly contribute towards accelerating this process by simply reviewing and curating data, or by designing projects that will motivate people to participate in more such endeavours. Citizen science activities should also be considered for school and college curriculum in order to bring children a little closer to nature so that they can escape their world of virtual reality. 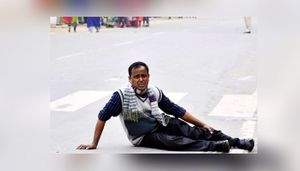 Over 70 Ex-Teachers Injured In Tripura Lathicharge