Altogether 7,487 beneficiaries of the district will benefit from the scheme to take up income-generating activities in the manufacturing, trading and services sectors by forming SHGs.

Bora, speaking on the occasion, said that the Assam government has undertaken several initiatives for all-round development in the State. Schemes have been initiated for empowering farmers, workers and students belonging to economically backward sections, elderly people, differently-abled persons and also other sections of society, in an inclusive manner, he said. 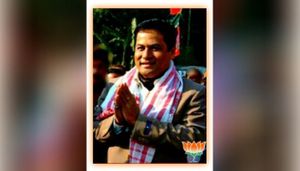