BHASKAR SAIKIA writes about the unique phenomenon of migrating earthworms.

Imagine a journey through rolling hills on a meandering road, obscured in mist. Now and then, the sun shines through the canopy of clouds to il­luminate the rain-drenched meadows, where cattle roam free. The constant whoo-whoo of the wind echoes through the empty valley silhouetting your soul into the mystery of creation; creation, that enigma, we are still grappling to understand. This is the surreal experience I had when I visited Mawlyngot, about 45 kms from Shil­long, for the first time in September, 2011. Why did I take a road less travelled? Because, that was where Nature has been witnessing another marvel of creation unfold­ing since who knows when.

I am talking about the mass migra­tion of earthworms, which I believe, you have not heard of until now, at this remote hamlet nestled atop a plateau named Mawlyngot. In what could be a little-known phenomenon previously known only to the locals, Mawlyngot witnesses an annual mass migration of earthworms every Spring and autumn. This two-way annual migration of the earthworm species, Perionyx macintoshi – which is characteristically identified by their rather large size and an iridescent blue coloured skin – is an arduous journey across stiff cliffs and slopes that is both essential and risky for them.

The study on documenting the mass migration of this earthworm species was initiated by Ilona Jacinta Kharkongor, a senior scientist work­ing in the Zoological Survey of India, Shillong centre. From 2011 to 2015, we carried out regular field studies to unravel the ‘when’, the ‘why’, and the ‘how’ of this two-way mass migra­tion of earthworms.

Our finding – published in the latest issue of the Records of the Zoological Survey of India – is the first comprehensive report of a two-way mass migration of earthworms. Previ­ous information on earthworm migration dates back to the 1980s and that dealt with one-way migration – either uphill or downhill – which were more of a chance encounter, rather than any regular field observation.

The uphill Spring migration starts in April-May each year, which coincides with the onset of the monsoons, when the earthworms emerge from the rivers and streams where they ‘overwinter’ under rocks. This is probably triggered by the increased flow of water in rivers like Um Song and its tributary Um Stew, and Um Ñiuh that skirt around the plateau on which Mawlyngot is situated. The upward migration begins in the early hours of the morning that continue for up to a week.

Similarly, when the vegetations begin to dry off, along with a drop in tem­perature and humidity with the onset of autumn, the downhill migration begins, typically around September-October. Due to the rocky strata of the plateau at Mawlyngot, the earthworms cannot migrate deep into the soil, which prob­ably compel them to take the downhill migration. The earthworms descend in batches, and when nearing the rivers, they form masses of balls consisting of hundreds of earthworms so that they are not predated upon by fish. Once in the water, they will ‘overwinter’ underneath rocks in these rivers, until the onset of next Spring, when the migratory cycle will kick in again.

(The writer works at the Shillong Regional Centre of the Zoological Survey of India.)

WOMEN PLUS - Suffering in silence 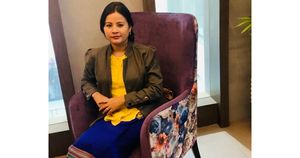