Washington, Jan 30: The House’s chief law enforcement officer is tightening security for travelling lawmakers as Congress reassesses safety in an era when threats against members were surging even before Donald Trump’s supporters attacked the Capitol.

Capitol Police officers will be stationed at Washington-area airports and the city’s Union Station train depot on busy travel days, the acting House sergeant at arms said in a memo obtained on Friday. Timothy P Blodgett said he’s set up an online portal so lawmakers can notify the agency about travel plans, and he urged them to coordinate trips with local police and airport officials and report suspicious activity to authorities.

Capitol Police “will not be available for personal escorts,” said the email, sent late on Thursday. “However, they will be in place to monitor as members move through the airport.” The steps underscored political divisions that grew increasingly acrid, even potentially dangerous, during Trump’s invective-filled four years as President.

In addition to personal verbal attacks against perceived foes, Trump stirred up supporters with relentless streams of bogus conspiracies like his false charge that Democrats stole November’s election from him. – AP 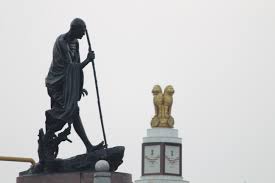 Mahatma’s statue vandalised in US