In a press release, the ASDC claimed that the consecutive Congress and now the BJP-led governments have shown disrespect towards the “genuine and Constitutional demands of the people of Karbi Anglong and Dima Hasao for implementation of Article 244 (A) for creation of an Autonomous State within the state of Assam.” Repeated memorandums to the government and demands for an Autonomous State during the Parliamentary, Assembly and Autonomous Council elections as well as during public meetings have all “fallen on deaf ears”, it said.
However, contrary to the ASDC’s claim and defying the boycott calls given by several underground ultra organizations, there was spontaneous and enthusiastic response from people during the celebrations across Karbi Anglong and West Karbi Anglong districts on Tuesday.

Biswanath Chariali Correspondent adds: Along with the rest of the State, Republic Day was celebrated here in a befitting manner. The Tricolour was unfurled at the Kachari Maidan by DC Pranab Kr Sharma. Local MLA Pramod Borthakur was present on the occasion. The 17 Assam Rifles displayed weapons in the parade ground. At Gohpur, SDO (C) Aditya Vikram Yadav hoisted the flag at Gohpur High School ground. MLA Utpal Borah was present on the occasion.

Rangiya Correspondent adds: At the Rangiya HS School playground, the Tricolour was hoisted by SDO(C) Swapneel Paul, who recalled the contributions of the freedom fighters of Assam. Troops of Assam Police, NCC, Scouts and Guides, schools and colleges took part in a march past. Freedom fighter Krishna Kanta Lahkar and Pradhan Mantri Bal Shakti Puraskar awardee Tanuj Samaddar were feliciated. A friendly cricket match was also held between SDO XI and the Rangiya Sports Association.

Dergaon Correspondent adds: On the occasion of Republic Day, Inspector Dipak Bora, officer-in-charge of the Golaghat Police Station, was awarded the police medal for his outstanding contribution to the Assam Police. A resident of Santipur here, Bora worked towards prevention of antisocial activities.

A Correspondent from Jamugurihat adds: At the office of the Naduwar development block, BDO Rajib Bora hoisted the Tricolour during the Republic Day function. Naduwar Anchalik Panchayat president-in-charge Ajit Payeng was present. At Jamuguri PS, OC Pranjal Kumar Nath hoisted the Tricolour.
ANN Service from Patacharkuchi adds: At Bajali subdivision, the flag was hoisted by SDO(C) and ADC and in charge of Bajali, Nayanjyoti Bhagabati. A cultural programme was also organised, in which many eminent persons were felicitated.
ANN Service from Azara adds: The Republic Day was celebrated in and around Azara in all educational institutions, training institutes and government and private offices. Government officials, teachers and students took part in the celebrations. 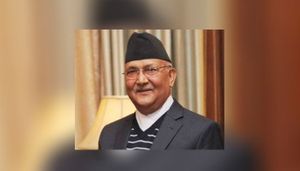