Like many of his short stories and novels written in the backdrop of Doomdooma, the tiny industrial township of upper Assam surrounded by tea gardens, the story of Chameli Memsaab written by journalist and writer Nirode Chaudhury is based on a real life story of a tea garden damsel in the vicinity of Doomdooma. In fact late Chaudhury himself admitted that just like English novelist Thomas Hardy in whose novels like The Mayor of Casterbridge, Jude the Obscure and Under the Green Tree the city of Wessex came alive, it had been his endeavour, too, to bring Doomdooma to life in his various short stories and novels.

There is no denying the fact that Doomdooma shot into fame first after the publication of the eminent writer late Jogesh Das’s novel Dawor Aru Nai (1955) set at Doomdooma in the backdrop of ravages of the Second World War (1939 -1945) and of the moral degradation brought to the then society in its wake. Again with the release of the Chameli Memsaab, the film version of the story by Nirode Chaudhury, Doomdooma came to limelight for a second time in a vibrant and varied form. Incidentally both the writers were from Doomdooma and were associated with the Assam Tribune Group of Publications.

It is pertinent to note that except Jogesh Das’s novel Dawor Aru Nai, none attempted to write a novel on the Second World War in Assamese afterwards. In this regard Nirode Chaudhury felt, as revealed by him in his offbeat autobiography Doomdooma, Doomdooma, there must have been enough materials to write a novel on the war. But he was then too young and was not matured enough to write a novel on war, the way he later became capable of expressing his subtle thoughts to write a short story like Chameli Memsaab. Even then Chameli Memsaab gave exposure to Doomdooma in a different way after its release in 1975. This was because till date Chameli Memsaab was the only Assamese story to have been transformed into celluloid in three prominent Indian languages, i.e., Assamese, Bengali and Hindi. Secondly, it was the first Assamese film that won the award for the Best Music Direction for Sudhakantha Dr Bhupen Hazarika. Thirdly, it earned the distinction of being the first Assamese film to be screened in the Rashtrapati Bhavan, New Delhi.

The making of the film had to overcome many hurdles. So was the challenges – so dramatic and full of romances as found in the short stories – that late Chaudhury had to encounter while attempting to pen the story. To his credit five of his stories have been made into films. Those are Chameli Memsaab, Banahongsha, Kanchghar, Mon Prajapati and Pani.

Nirode Chaudhury’s journey towards the medium of films was a studious and long one. It had its beginning when he got himself associated with the then widely-circulated popular Assamese weekly Asam Bani as a regular column and sectional writer and from there he tried his hand in short story writing. Initially his short stories tried to portray the psychological aspects of the woman minds. It contributed largely in establishing him as a very popular romantic short story writer.

He carved a niche for himself as a column writer of ‘Page 3’ of the popular Assamese weekly Asam Bani on various thrilling and human-interest stories like life sketches of Nobel laureates, Adolf Eichmann responsible for the killing of the Jews, Hollywood’s romantic actress Marilyn Monroe and the Profumo, Christine Keeler’s biggest political scandal of the twentieth-century British politics, to mention a few. Thus his writings contributed immensely for popularization of the weekly. But his coverage of sensational case of judge Upen Rajkhowa killing his entire family set an all-time record in circulation of the said weekly.

He also wrote for the cinema page of the weekly where in addition to covering cinema-related stories of Assamese, Bengali and Hindi films, a regular review of the newly-released Hindi cinema under the caption ‘Guwahatir Chabigharat’ was also published. This paved the way for him to become a film critic. He started minutely observing and studying various aspects of filmmaking and thus he gradually ventured to become a script writer, dialogue writer and even composer of film songs. Out of experience so gathered, he wrote a book titled Asamiya Bolchabir Itihash (History of Assamese Films), the first of its kind in Assamese language so far.

Obviously there will be quite a number of other litterateurs and artists as well who have switched over to one of the most powerful mediums of modern age like the audio-visual media from the print media. But in case of Nirode Chaudhury, it sprouted during the days he worked as a journalist for Asam Bani.

The most exceptional thing about Chameli Memsaab is that the humanitarian aspect of a character that he brought out so assiduously from a real life person transcends itself beyond the geographical boundaries through the film medium and was not only able to catch the attention of whole of India but was also able to glorify the place known as the ‘Tea City’ situated in the easternmost frontier of the State of Assam, i.e., Doomdooma.

(Published on the occasion of Nirode Chaudhury’s death anniversary today.) 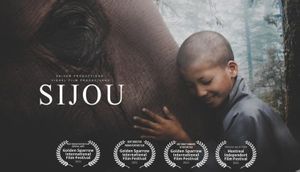 Covid and the transplant crisis