New York, March 3: Indian-American Neera Tanden, who had alienated politicians on all sides, has withdrawn her nomination for a cabinet position, but US President Joe Biden has promised her another job that will not need Senate approval.

"I look forward to having her serve in a role in my administration. She will bring valuable perspective and insight to our work," Biden said on Tuesday night after Tanden accepted defeat in her bid for Senate confirmation as the director of the Office of Management and Budget (OMB).

After a week of desperate attempts by Biden and Democrat leaders to get at least one Republican senator to defect and vote for her, she wrote to Biden, "Unfortunately, it now seems clear that there is no path forward to gain confirmation, and I do not want continued consideration of my nomination to be a distraction from your other priorities."

The post of the director of the OMB is one of the most powerful in the US as the official oversees the crafting of the $5 trillion US budget for all the departments and vets policies and appointments.

She would have been the second Indian-American to be in the US cabinet, the first being Republican Nikki Haley, who was in former President Donald Trump's cabinet.

Biden can appoint Tanden to a senior position in the White House which would not need Senate approval like the cabinet and some senior jobs.

This was the first defeat for Biden in getting a nominee through the Senate and it had been expected from the time she was one of his first nominations in November shortly after his election because of her volatility.

In contrast to Tanden, Biden's nominee to be her deputy, Shalanda Young, was warmly received by leaders of both parties. The African American woman is considered a possible replacement for Tanden as she has already faced a Budget Committee hearing and her confirmation could be speeded up.

The influential Republican Senator Lindsey Graham hinted at backing her for the top job, telling her, "You'll get my support, maybe for both jobs."

After Democrat Senator Joe Manchin announced that he will not vote for her citing her venomous tweets and statements, her confirmation in the evenly divided Senate was in doubt.

"I believe her overtly partisan statements will have a toxic and detrimental impact on the important working relationship between members of Congress and the next director of the Office of Management and Budget," he said.

After some Republican straddlers had refused to vote for her, the Democrat's last hope was Republican Senator Lisa Murkowski, but she would not commit to supporting her either.

A reporter had shown her in public a Tanden tweet in which she said Murkowski sounded like she was "high on your own supply." She added, "You know, we know, and everyone knows this is all garbage."

Tanden, who is close to Hilary Clinton and advised her campaign, had also attacked Leftist Senator Bernie Sanders who had run against her for the Democratic Party's presidential nomination in 2016.

Tanden had also physically attacked Sander's campaign manager Faiz Shakir when he had worked for her at the Centre for American Progress think tank. She admitted to The New York Times, "I didn't slug him, I pushed him."

Sanders now heads the Senate Budget Committee that had to first approve her nomination and the panel put off the vote set for last Wednesday.

Sanders, who told her when she appeared before the committee, "There were vicious attacks made against progressives, people who I have worked with, me personally," also did not confirm if he would vote for her.

Tanden, who had deleted more than 1,000 tweets just before Biden named her for the OMB post, told senators that she regretted her remarks, but also admitted that she had probably meant them when she wrote them.

Although many conservatives were at the forefront of the opposition to Tanden, the US Chamber of Commerce endorsed her while some leftists also campaigned against her.

Democratic Party' left-wing group, Roots Action, organised a "Twitter storm" against her, calling her, "One of the most prominent anti-progressive voices of the neo-liberal establishment" -- a reference to her closeness to Clinton.

South Asians for Biden, a group that campaigned for him, mobilised members of the community in a last effort on Tanden's behalf to contact key senators who could ensure her confirmation.

Representative Judy Chu, who heads the Congressional Asian Pacific American Caucus, said, "I'm disappointed that such a qualified candidate was subject to such a negative double standard."

Several Democrats have said that Republicans went along with Trump, who was known for his mean tweets, but were now setting a very high standard for Tanden.

Biden has appointed over 20 Indian-Americans to senior positions, but not all of them require Senate confirmation.

A controversial one is that of Vivek Murty, the nominee for surgeon-general. He faces opposition from the gun lobby for his advocacy of strict gun controls, which he sees ultimately as a health issue because of the deaths and injuries caused by the wide availability of firearms.

A conservative group has launched a TV campaign against Vanita Gupta, a civil rights leader who has been nominated for associate attorney-general. But another conservative group is launching a counter-campaign in support of her and many conservative leaders and media have also endorsed her. 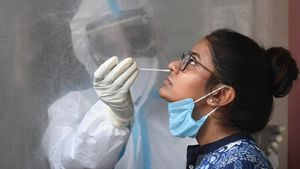