Dipanjon Konwar brings to life stirring events of a hoary past.

My maternal grandparents, Puthadeo and Annaideo, were from the north bank of the Brahmaputra, of the Chetia-Patra Baruah and Sadiya-Khowa Buragohain families, respectively. They both drowned, along with three daughters, one son and a daughter-in-law, in a tragic boat accident in March, 1943 – when their country boat was hit by an Allied Army motorboat while crossing the Brahmaputra from the Mohanaghat. This decision to cross the river was taken by my maternal grandfather Krishna Baruah – as he became anxious with the American soldiers, mostly Black Americans, setting up camps on the fields behind his home in Dibrugarh. The American troops, under the leadership of US Army General Joseph W. Stilwell, were building a motorable road across the Patkai Hills to push the Allied troops and armaments to the China-Burma-India World War-II front. My mother, who was three years old, and another sister, who was 15, were saved by the sailors of the Army boat.

Though late Khagen Mahanta sang in his famous Assamese song that Sadiya nu ki – ring eta baat, it remained for my mother a distant, misty land across the mighty Brahmaputra and she never visited her ancestral homes ever, growing up in Dibrugarh in her elder brother’s home. In the first week of January, this year, I, along with a couple of colleagues, crossed the Dhola-Sadiya Bridge and felt my mother’s spirit tagging along with me. The old Sadiya town, devastated in the great earthquake of 1950, has been washed away by the Brahmaputra floodwaters. We entered the Sadiya frontier territory, crossing the bridge and drove along the smooth four-lane highway into the Chapakhowa town, headquarters of the Sadiya Circle in the Tinsukia district. The hospitality of the Assamese in these parts overwhelmed me, they really go overboard! The real essence of Attithi devo bhava can be found preserved in this remote and rustic place. I had similar feelings when visiting my Bhutanese friends in their country. Maybe it is the Himalayas and the mountain air that has filled these people’s hearts with graciousness and made them so large-hearted. A local restaurant owner – Ramesh Saikia, refused to take money for the cup of tea I had and then offered me tamul-paan (betel nuts and leaves).

It was from Ramesh that I heard for the first time about Chufa Pleung alias Ranua Gohain – the hero of the Sadiya frontier. Many citizens of Sadiya asserted that Ranua Gohain was the first freedom fighter to raise arms against the occupying forces of the British East India Company in 1839. Even though history tells us that Gomdhar Konwar and Dhanajoy Borgohain were the first ones to do so in 1828, much before the Sepoy Mutiny of 1857, Ranua Gohain’s revolt is also an important milestone in Assam history. Thus, the citizens and youths of Sadiya have formed a Ranua Gohain Smriti Surakshan Samity and they propose to instal a life-sized statue of Ranua Gohain near the Sadiya side of the Dhola-Sadiya Bridge.

On March 5, 1825, the first Burmese war broke out and the invading Burmese General Maha Bandula was recalled by his king. With orders from Calcutta, the British detailed a force of 3,000 sepoys with guns and an armed flotilla assembled at Goalpara, under the command of Colonel Richards for the task of turning the Burmese out of the Brahmaputra Valley. They marched ahead and cleared Gauhati with little resistance. In late-April, Colonel Richards was joined by David Scott, who had marched across the Jaintia Hills from Cachar with three companies of the 27th Native Infantry.

By the end of January, 1826, Colonel Richards fought a battle with the Burmese near the Namdang river and then pushed on to the Burmese-occupied Ahom capital Rangpur, Sivasagar. In the battle to take back the Ahom capital, the 57th and 46th Native Infantry fought hard with the Burmese, with considerable losses to both the parties. The Burmese abandoned Rangpur and retreated across the Patkai Hills. As King Chandrakanta Singha had fled to Bengal to escape the Burmese, and Purandar Singha was in British territory, the English surreptitiously, through the Yandaboo Treaty (1826) with the King of Ava, took over Assam and all of the frontier territory. But in 1833, owing to the immense extent of the country now in the English hands, which was not easy to administer, they decided to hand over the portion of the country from Dhansiri to Dibru river to the Ahom prince Purandar Singha.

David Scott was appointed the first Commissioner of Assam. The Assam Light Infantry and Sebundy Corps (local levies) were distributed at prominent places across Assam, a strong detachment being in Jorhat. Another big detachment was placed at Sadiya under Colonel White, the Political Agent to the Khamtis and Singphos. In 1835, dispute arose between the Sadiya-Khowa Gohain and the Matak chief over the control of land. This and the resentment of the locals against the English, and the fear of being taxed, soon led to a rebellion in January, 1839.

Colonel White, placing too much confidence on the allegiance of the Khamtis, was totally unprepared, though warned of trouble. On the night of January 28, 1839, around 2 a.m., Ranua Gohain led his men, consisting of Khamtis, Singphos and Ahoms. They surrounded and attacked Sadiya at different points, burning houses and attacking the main stockade. In the confusion, the sleeping troop and guards were slaughtered – 80 men, women and children were killed. Colonel White, while escaping from his quarter, was pierced with nine spear wounds and he collapsed and died. The English troops soon regrouped and fought back. The next day, the troops from Jorhat, Dibrugarh and other centres were hurried to Sadiya to chase away the rebels. With this, the entire province of Assam was taken over by the East India Company government. 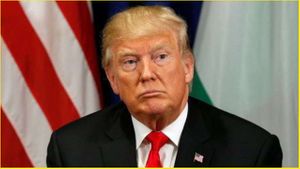 Trump acquitted in 2nd impeachment, but Republican leader blasts him