Two freedom fighters of Assam were hanged by the British in public at Jorhat on this day 163 years back (February 26, 1858) for the same offence of ‘treason,’ for plotting against the colonial rulers. Several of the co-conspirators were exiled, while some were jailed for different durations. All of them faced the charge of hatching a plot to drive away the British from Assam by inciting a revolt in keeping with the 1857 Sepoy Mutiny. One of the two hanged to death was the mastermind. He was working from Calcutta (now Kolkata), a place far away from Assam. He is now a celebrated name in Assam. However, the main executor of his plans on the ground, who was hanged alongside him, and all others who were arduously involved in the revolt and were subsequently punished by the rulers, have by and large been consigned to oblivion.

Maniram Dewan and Piyali Baruah were hanged for their role in the 1857 revolt in Assam. While Maniram was providing guidance for the revolt sitting in Calcutta, Piyali, alias Mahesh Chandra Gabharumelia Baruah, was the chief lieutenant who was diligently executing the plans in Assam.

Piyali Baruah (not to be confused with Piyoli Phukan who was hanged in 1830) was initially assigned with the task of meeting Dutiram Fouzdari Seristadar, the Pani Phukan and others living in Sivasagar. The meeting was organized by Charing Raja (heir-apparent) or Prince Kandarpeswar Singha at the instance of Madhu Mallick, the man sent by Maniram from Calcutta as his emissary, prior to the outbreak of the 1857 upsurge in northern India. The plan was to drive away the British rulers and declare the Charing Raja as the king of Assam.

Piyali Baruah’s meeting with Dutiram resulted in the latter’s support to the cause. Piyali was then deputed to Golaghat with letters from the Charing Raja, aiming to arrive at an understanding with the native officers of the sepoys at the Nogora camp of the Golaghat detachment to win their support to the cause and make them flare up around Durga Puja. Following his Golaghat visit, several leading sepoys visited the Charing Raja to settle the issues concerning their assistance and the remuneration in return. Piyali, a descendant of the Bezbaruah family of Jorhat, became a close associate of Kandarpeswar, along with Madhu Mallick, Luki Sensowa Barooah, Bahadur Gaonburha and Kamala Charingia Barooah, in organizing the revolt.

Historian Benudhar Sarma, in his famous treatise on Maniram Dewan, has stated that Piyali Baruah was the most trusted associate of Maniram. When Maniram left for Calcutta to meet the Governor General, he authorized Piyali to perform the role of the Ahom prince’s counsel on his (Maniram’s) behalf.

Piyali exerted such an influence on the sepoys that they vowed – at a meeting held at 9 pm of August 29, 1857, at the quarters of Shaikh Bhikhun, the Subedar of the Golaghat detachment – to behead Haranath Barooah at Jorhat and then set fire to CJ Holroyed’s house at Sivasagar on the Maha Astami day and subsequently declare Kandarpeswar as the King of Assam, says Sarma.

According to the Political History of Assam (Volume-I), in mid-August, 1857, the Commissioner of Assam Major Jenkins was informed by Col CJ Holroyed, the then Principal Assistant Commissioner, that several officers of the Assam Light Infantry with the Golaghat detachment had entered into a conspiracy with prince Kandarpeswar, offering him assistance “to reinstate him on his throne and maintain the country for him”. Holroyed came to know of the entire plot when a letter from Maniram to Piyali Baruah, meant for Kandarpeswar, was by mistake handed over to Haranath Parbatia Barooah, the Sadar Daroga of the British police, by Maniram’s Bihari messenger.

Following this, a European force, comprising 104 seamen, was dispatched to Assam by the Governor General under Lieutenant Davis on September 11, 1857. Meanwhile, Major Hannay called back his trustworthy non-Hindustani sepoys from the outlying detachments to guard the military lines at the headquarters. In Nagaon, Mr Morton, the Principal Assistant, destroyed the bridges over the rivers Misa and Diju and cut off communications with Jorhat to check the mutineers’ entry in Nagaon district.

While the rebellious sepoys could not arrive at a unanimous decision on how to pounce upon the British officers and their lackeys, the colonialists missed no time in apprehending their leaders. And, on September 9, Holroyed, with a detachment under Capt Lowther, arrested Charing Raja, sent him straight away to Calcutta and made him a state prisoner at Alipur. Piyali Baruah was arrested in Jorhat and kept as a prisoner at Kandarpeswar’s Jorhat palace. Mallick was also arrested in Jorhat. Their arrests were followed by Maniram’s arrest in Calcutta, and other key collaborators including Dutiram Baruah, Madhuram Koch, Bahadur Gaoburah, Sheikh Formud Ali, Luki Sensowa Baruah, Nilkantha Soladhara Phukan, Kamala Charingia Baruah, Narayan Barbara, Mayaram Barbara, Umakanta Barthakur Muktiyar, Marangikhowa Gohain and others. Thus, in Assam, the 1857 revolt was nipped in the bud.

While Kandarpeswar was released in 1859 and later kept in Guwahati under house arrest, Mallick was sent to Andaman, Madhuram Koch was awarded a seven-year imprisonment, Narayan Barbara received a three-year jail term, Mayaram Barbara was banished to Andaman for 14 years, and Umakanta Barthakur was jailed for one year. Dutiram was banished to Andaman for life. Though he was released following an appeal by his son Priyalal on September 16, 1863, he was kept confined in Guwahati, where he died in 1873. Nilkantha Soladhara Phukan, Kamala Charingia Baruah and Luki Sensowa Baruah were sent on a 14-year banishment, along with the son of Rupahi Aideo. And, Maniram and his trusted lieutenant Piyali Baruah were hanged in public on February 26, 1858 in Jorhat.

Unfortunately, today the sacrifices of all the other people, barring Maniram’s, have been relegated to the dark alleys of amnesia, despite their active roles in the effort to drive away the British and reinstate the Ahom kingdom in Assam. It is a historical injustice that needs to be undone. 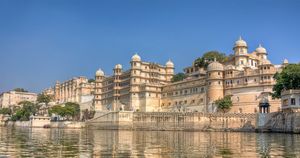 TRAVEL - In the city of lakes