Letters to the EDITOR

Sir, – It is extremely unfortunate that the compulsory applicability of FASTag at the toll plazas on the National Highways has been rolled out by the Central Government, inconveniencing a large number of travellers. While e-payment facilities should be encouraged, the way it has been enforced is almost draconian. There is a price to be paid for a FASTag kit, too. The Central Government would levy 100% penalty on vehicles without FASTag. Further, many of the toll plazas are almost within the vicinity of the cities, towns and even villages. The applicability of FASTag was introduced in 2016, but the Government forgot its issuance at the time of vehicle registration or renewal of vehicle registration, itself. The Government seems to have forgotten the weak, elderly, needy and the poor in the process, as also the minimum convenience of citizens.

It is demanded that the Central Government immediately withdraws the compulsory enforcement of this draconian law, and allow payments at toll plazas by cash, etc., at normal rates, without any additional charges. Yours etc., D BHUTIA, RG Baruah Road, Guwahati.

Sir, – The news item published in your esteemed daily on February 6, 2021 under the caption ‘Prime Minister urged to accord due recognition to martyrs of Quit India Movement’ sent by Sambhu Boro, your Tezpur correspondent, is very praiseworthy. The story was projected timely on the eve of Prime Minister Narendra Modi’s visit to Dhekiajuli. In fact, the letter written by one Subhash Chandra Biswas of Tezpur incorporated in the news story is also equally praiseworthy for approaching the Prime Minister for due recognition to the martyrs of the Quit India Movement of 1942 where Dhekiajuli played a historic role by scarifying 13 lives in the freedom struggle of India. It is sad that the nation has not given due recognition to these martyrs. I would like to request the Chief Minister of Assam to take appropriate steps in this regard. Yours etc., DIPAYAN DUTTA, Rukmini Nagar, Dispur.

Sir, – I would like to attract everyone’s attention to the fact that our State has been overrun by the Hijras (eunuchs/transvestites), not politically, but in the most literal sense. One cannot venture out either by private or public transport without being accosted by them demanding money at almost every bus stop, traffic light crossing or toll gate. These transvestites, whether real or just men in women’s clothing and make-up, have become a menace that one encounters daily. Furthermore, almost all of them are from outside Assam, but it hasn’t stopped them organizing and running full-fledged extortion and a rumoured prostitution racket. The local administration and the law-and-order authorities have not yet taken any action in this regards. I would therefore request the authorities concerned to take steps to eliminate this blight, and appeal to the society at large to shed their superstitions and stop giving them money.

Donation to the Hijiras for blessings or to avert curses is not and never was a part of our otherwise extremely tolerant Assamese culture. Yours etc., RAVI JYOTI DEKA, Silpukhuri, Guawhati.

Sir, – Through your esteemed daily, I would like to raise a new problem that the villagers in our locality are facing – the monkey menace. Every day mostly in the morning hours, a group of monkeys enter our locality and take away the food items that are kept outside. Moreover, they destroy the small vegetable gardens of the villagers. If any door or window is kept open, they even enter the kitchen and take away whatever they can lay their hands on. The small village economy is totally destroyed by the monkey menace. So the authority concerned should take early measures to relieve the poor villagers from this predicament. Yours etc., ANUP TALUKDAR, Nagarbera, Kamrup.

Sir, – Apropos your esteemed daily’s February 10, 2021 issue where Sanjoy Ray wrote about Ramananda Sarkar, the Smashan Bandhav who cremated more than 700 Covid -19 casualties, it was a poignant narrative. It is sad that people who matter have ignored his services. People like Ramananda Sarkar must be looked after. Such a gesture will give the much-needed fillip to others. Such selfless devotion to the public duties must be rewarded. Yours etc., Wg Cdr G BARUAH (Retd), Mother Teresa Road, Guwahati.

Can we turn Bharalu into Amstel? 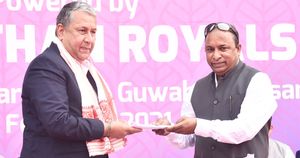