Lalu Shifted To Private Ward As His Condition Improves

New Delhi, Jan 28: Former Chief Minister of Bihar Lalu Prasad has been shifted to a private ward from the cardiac intensive care unit (CICU) after his health improved on Thursday, doctors at All India Institute of Medical Sciences (AIIMS) here informed.

"He is improving. The fluid retention in his lungs has reached a normal level. He is also not facing any difficulty in breathing," a senior doctor from the team assigned to look after Lalu's health told IANS.

The former minister was kept in the CICU of the hospital under the supervision of Dr Rakesh Yadav, a noted cardiologist AIIMS. He has treated Lalu earlier as well.
Dr Yadav had earlier said that the leader was gradually recovering from pneumonia infection which infected his lungs. He had developed Pulmonary Edema, which led to the pneumonia infection.

Pulmonary Edema is a condition where excess fluids get collected in the lungs.
72-year-old RJD chief was admitted to AIIMS on Saturday. He was brought to Delhi by air ambulance through a chartered flight after his health condition deteriorated while undergoing treatment at Rajendra Institute of Medical Science (RIMS) Hospital in Ranchi where he was admitted earlier.
His wife Rabri Devi and sons Tej Pratap and Tejashwi Yadav accompanied him to the hospital.

An eight-member team of RIMS had referred him to AIIMS for the treatment. RIMS Director Dr Kameshwar Prasad had told IANS that Lalu was found to be infected with pneumonia and had trouble breathing.
The former Union Minister has been in jail since December 2017 after being convicted for a fodder scam. He has served most of his jail sentence in Jharkhand at the RIMS hospital. - IANS 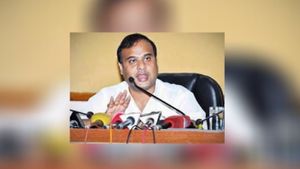