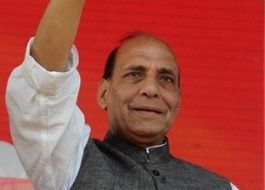 Bengaluru, Feb 3: India is vigilant in the face of attempts to change status quo at its border and is prepared to defeat any misadventures to defend its territorial integrity, Defence Minister Rajnath Singh said on Wednesday, amid the continued military standoff with China.

“We have long witnessed unfortunate attempts to employ force to change the status quo at our unresolved borders,” he said at the inaugural ceremony of Aero India-2021, the country’s premier Defence and aerospace show, at Yelahanka Air Force Station here.

“India is vigilant and prepared to counter and defeat any misadventures to defend our people and territorial integrity at all costs,” he asserted.

China and India are locked in a military standoff in eastern Ladakh since May 5 last. The two countries have held several rounds of military and diplomatic talks to resolve the face-off, but no significant headway has been made so far.

With a combination of both physical and virtual exhibition, the 13th edition of the biennial international event is said to be the world’s first hybrid aerospace show.
Singh also said India plans to spend $ 130 billion on defence modernisation in the next 7-8 years with the focus on domestic manufacturing of bigger and complex platforms.

The government has since 2014 brought in many reforms in the defence sector to create a conducive ecosystem for exports, foreign direct investment and offset discharge, he noted.

To achieve the twin goals of self-reliance and exports, the government has set a target to achieve a turnover of Rs 1,75,000 crore in the field of defence manufacturing, including export of Rs 35,000 crore in aerospace and defence goods and services, by 2024, Singh said.

The government has taken several steps to strengthen the country’s security apparatus recently. Domestic manufacturing of bigger and complex defence platforms has now become the focus of our policy under the ‘Aatma-nirbhar Bharat Abhiyaan’, he said.

Singh said he has been informed that about 540 exhibitors, including 80 foreign companies, Defence Ministers, delegates, Service chiefs and officials from more than 55 nations are participating in the Aero India event.

Singh also expressed gratitude to the Defence Ministers from Maldives, Ukraine, Equatorial Guinea, Iran, Comoros and Madagascar who have attended this show in person, and many others who are joining virtually. – PTI 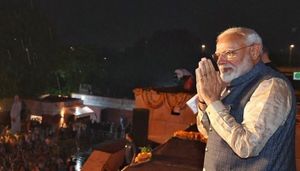