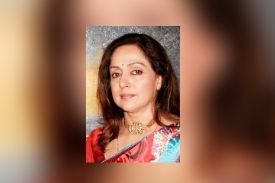 New Delhi, Feb 4: Veteran actor and BJP MP Hema Malini on Thursday said she is intrigued by foreign celebrities’ support to ongoing farmers’ protests when India was just a name “they have heard”.

“I’m intrigued by foreign celebrities to whom our glorious country, India, is just a name they have heard, boldly making statements about our internal happenings and policies!” Malini tweeted.

“Wonder what they are trying to achieve, and more imptly (importantly), who are they trying to please?” she added in reference to American pop star Rihanna’s tweet on Tuesday.

Rihanna had called attention to the plight of the agitating farmers on social media by sharing a CNN report over the Internet shutdown at the protest sites at Delhi border.

In a statement issued on Wednesday, the Ministry of External Affairs had slammed the remarks made by Rihanna and other celebrities and activists on farmer protests, saying the facts on the issue must be ascertained before people rushing to comment on it.

The MEA had asserted that the farm laws were passed by Parliament after a full debate and discussion.

Personalities including Sachin Tendulkar, Virat Kohli, Lata Mangeshkar, Akshay Kumar, Ajay Devgn, Karan Johar and others rallied around the government on social media using hashtags – #IndiaTogether #IndiaAgainstPropaganda as they reacted to a statement by the Ministry of External Affairs on the issue.
These tweets advised people to not fall for “false propaganda” and support “an amicable resolution”, rather than paying attention to anyone creating differences. – PTI