Govt may consider Oriental Insurance or United India for privatisation

NEW DELHI, Feb 21: The government may consider privatising Oriental Insurance or the United India Insurance Co as their financial health has improved after a series of capital infusions, people aware of the development said.

To further strengthen their financial health, the government is expected to infuse Rs 3,000 crore in the public sector general insurance companies during the current quarter.

Both Oriental Insurance and the Chennai-based United India Insurance may be able to generate interest from the private sector because of their improved financials, sources said.

The process of choosing a suitable candidate for privatisation has just started and will take some time to decide, sources said while not ruling out the possibility for listed New India Assurance, where government stake stands at 85.44 per cent.

As per the plan, NITI Aayog will make recommendations to the government for privatisation and Department of Investment and Public Asset Management (DIPAM) under the Ministry of Finance will take the proposal to its logical conclusion.

Finance Minister Nirmala Sitharaman in her Budget 2021-22 had announced a big-ticket privatisation agenda including privatisation of two public sector banks and one general insurance company.

As part of the divestment strategy for the financial sector, the government has decided to go for mega initial public offering (IPO) of Life Insurance Corporation of India (LIC) and residual stake sale in IDBI Bank during the financial year beginning April.

The government has budgeted Rs 1.75-lakh crore from stake sale in public sector companies and financial institutions during 2021-22. 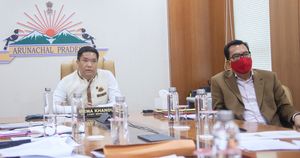