Ghazipur, March 28: The farmers, who have been agitating at Delhi borders for the past four months, would be burning copies of the farm laws as part of the 'Holika Dahan' celebrations on Sunday. They have also invited the police personnel from Delhi and Uttar Pradesh, deployed at the borders, to join the Holi celebrations.

"We will celebrate Holi with the Delhi and UP Police personnel deployed at the border. We will make the necessary arrangements for them and communicate to them asking them to celebrate Holi together," Tikait told IANS.

"If all the security forces and police officials do not exchange Holi pleasantries with them, then we (farmers) will think that the Central government does not want to talk to us. The Delhi Police will be given an invitation to join us for Holi celebrations as they, too, are on police duty away from their homes. Everyone should be present at the border in the evening on the occasion of 'Holika Dahan'."

Asked will you also invite the government on Holi celebrations? To this, Rakesh Tikait said, "We (farmers) will only invite the security forces and policemen at the border and not the Central government.

At the Ghazipur border, the farmers have been singing songs and beating drums to celebrate the Holi, and would be burning the copies of three Union farm laws on the occasion of 'Holika Dahan'. - (IANS) 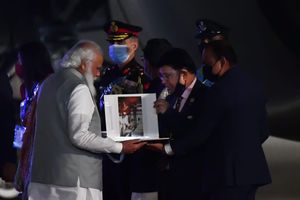 India will donate military equipment used in 1971 for museums