Imphal, Feb 23: In a major haul, the Manipur Police seized banned party drugs, worth Rs 14 crore in the international market, in Imphal West district and arrested three persons in this connection, a senior officer said.

Acting on a tip-off, a team of police personnel intercepted two trucks on Sunday near the Kanglatongbi- Shantipur area and recovered around 1.4 lakhs of banned WY tablets, Imphal West Superintendent of Police K Meghachandra told reporters.
"When the policemen searched the trucks, they found WY drug packets concealed in the bonnets of the vehicles," the SP said.

During interrogation, the arrested persons admitted that they were taking the party drugs to Assam's Guwahati to supply to an agent who resides there.
Following the recent reports of illegal activities here, the police have intensified checking of vehicles on the thoroughfares around the Imphal city, the SP added. - PTI 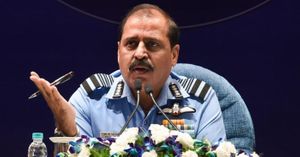 No new COVID-19 case in Mizoram