Days after the riots in US Capitol, Twitter on Friday permanently deleted the personal account of US President Donald Trump for violating the rules of the micro-blogging site, citing the risk of further violence.

On the other hand, Trump has accused Twitter of conspiring with his political enemies to silence him after the micro-blogging platform giant suspended his Twitter account services.

Meanwhile Trump didn't have any other option left in his hand but to use his official @POTUS account to share a series of tweets. Trump wrote, "Twitter may be a private company, but without the government's gift of Section 230 they would not exist for long. I predicted this would happen. We have been negotiating with various other sites, and will have a big announcement soon, while we also look at the possibilities of building out our own platform in the near future."

In another tweet Trump said, "We will not be SILENCED!" from the @POTUS government account, which has as many as 33.4 million followers. He further wrote, "Twitter is not about FREE SPEECH." However, Twitter also deleted the new tweets by Trump from his official government account POTUS.

According to reports, Speaker Nancy Pelosi of California Friday said that the House would take initiative to impeach President Donald Trump over his participation in inciting a violent mob attack on the Capitol if he refused to resign “immediately.” She had also appealed to the Republicans to join in pushing to force him out of office.

Melbourne Is OK For Australian Open 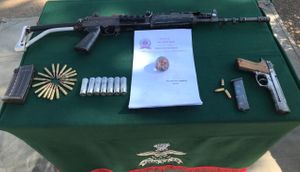