NEW YORK, Feb 10: After a day of tearful arguments and harrowing videos, Democrats have managed to pry only one more Republican Senator to their side as the second impeachment trial of former President Donald Trump started and they were still 11 votes short of the number needed to convict him.

For all the drama on Tuesday, with more to come in the next two days as the Democratic prosecutors continue presenting their case, it still seemed likely that they will not have the 67 votes to convict Trump on the charge of inciting an insurrection making the trial a spectacle rather than a vehicle of punishment.

The vote on the constitutionality of the impeachment trial was 56-44 in the 100-member Senate, with six Republicans joining the 50 Democrats to vote for it.

The other 44 Republicans closed ranks to oppose the preliminary measure required for the trial to proceed.

In an earlier vote on the same issue on January 26, only five Republicans had gone over to the other side and on Tuesday they were joined by one more, Bill Cassidy.

He attributed his change of heart to the “terrible job” done by Trump’s lawyers.

The Democrats were doing a “great job” and as “an impartial juror, I’m going to vote for the side that did the good job”, he said.

Even Trump’s lead lawyer Bruce Castor conceded during his argument that the prosecution had performed well.

Under the US political system, the House of Representatives frames charges against the President or other officials and sends the chargesheet to the Senate for a judicial-style trial with the Senators acting as jurors.

A two-thirds majority of Senators, which is 67, has to vote to convict.

In February 2020, Trump was impeached for the first time on charges of abuse of authority and impeding the work of Congress. But he was acquitted by the Senate as Democrats could not muster the two-thirds majority.

The first day of arguments in the second impeachment on Tuesday was supposed to have been filled with dry legal arguments on the constitutionality of impeaching Trump, who was already out of office, but the Democratic Party prosecutors brought in drama with videos of the deadly January 6 Capitol riots and also one shocking clip of a police officer firing into the mob killing a woman protester.

Lead prosecutor Jamie Raskin wiped his eyes and appeared to suppress a sob as he narrated how his daughter, who had come to the Capitol that day said she would never want to return there. – IANS 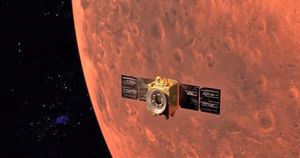