A visit of the Prime Minister of India, especially to a State which is set at a distance from Delhi, is considered to be fraught with significance. He is expected to clarify the position of the Union Government on issues of concern to the people of the region and perhaps announce welfare measures to be taken in the near future. Unfortunately, Narendra Modi seemed to have left his Prime Ministerial robe behind in the nation’s capital on his recent visit to Upper Assam and donned it as a leader of the BJP. His address during a largely attended rally at Sivasagar was more of a campaign speech dwelling as it did on the past ‘achievements’ of the Sarbananda Sonowal Government rather than offering insights on issues such as the Citizenship Amendment Act (CAA), the updated National Register of Citizens (NRC) which is currently mired in limbo, the fate of the expert committee report on Clause VI of the Assam Accord, tackling floods, steps for addressing the unemployment problem, the non-completion of the communication infrastructure related to the Act East Policy, et al. The reason for Modi’s reticence on this occasion is obvious. Prior to the 2016 Assembly elections in Assam, during his campaign, Modi had made tall promises involving solving the problem of illegal infiltration of foreigners from Bangladesh into the Northeast and complete sealing of the border.
During the tenure of the NDA Government led by Modi, far from these problems being solved, the CAA, which entails giving citizenship to illegal Hindus migrants from Bangladesh, has been foisted on the Northeast. Modi had made promises he could not keep, which had earned him the ire of people of this region, thus on this occasion he has deemed discretion to be the better part of valour, and refrained from making important announcements. The choice of the venue, of course, underlines the fact that the State BJP considered this to be a visit marking the commencement of its election campaign. It may be noted that BJP bastions in Upper Assam are in danger of crumbling because of recent political developments, thus Modi’s meeting at Jerenga Pathar, the site of Sati Joymoti’s martyrdom in the historic Sivasagar town, was meant to carry symbolic connotations and boost the morale of party workers. It was, to say the least, incongruous to see the Prime Minister of India handing out land deeds to recipients, a task normally carried out by petty government functionaries. Not surprisingly, organizations such as the AASU and AJYCP launched State-wide demonstrations to protest the backtracking of Delhi on the foreign infiltration issue. That Modi failed to assuage local concerns on this, or announce steps whereby the excess load of foreign migrants in the Northeast due to CAA would be distributed elsewhere, made his visit something of a damp squib.
Horticulture sector
Horticulture which could have played a big role in improving our rural economy remains a neglected sphere for the lack of required interventions by the State Government. No doubt some improvement has taken place in the horti sector in recent times as evidenced by the increase in the volume of the State’s horticultural produce, yet the full potential of this important sector is nowhere near realization. Not just Assam, the Northeast as a whole has the required geo-climatic conditions for triggering a horticultural boom but unresponsive government authorities have stood in the way of tapping this potential. Horticulture offers immense scope for our farmers to capture both national and international markets by adding values to their products and for this to happen, the State Government has to act as the facilitator. Food processing which is intrinsically linked to horticulture, too, has failed to gain ground for the same constraints. We only need to look at States like Sikkim and Himachal Pradesh and the neighbouring nation of Bhutan to see the role of horticulture and food processing in their economies. Such a horticultural boom has been possible in those States because of the active involvement of governments which are aggressively promoting horticultural entrepreneurship.
Bringing in technological interventions and quality planting material will be critical to triggering a horticultural boom. Constraints plaguing key sectors such as horticulture and food processing in which we have an inherent advantage should be addressed. Indeed, horticulture can open up new vistas for the farmers and arrest the sluggish growth of agriculture. Assam is endowed with the ideally diverse soil and climatic conditions for growing a variety of fruits, vegetables, flowers, and ornamental, medicinal and aromatic plants besides spices, mushroom and plantation crops. Sadly, the commercial prospects of horticulture remain largely ignored whereas it is an area replete with export potential. All this can change if our growers are provided access to the emerging trends and innovative expertise necessary for attaining excellence in the field. Another perennial drawback hindering the growth of our farming sector concerns the absence of market linkage and cold storage facilities. This dual constraint often compels our farmers to distress sale at throwaway prices benefiting the middle men. This means that even when there is good production, neither the farmer nor the consumer gets any benefit. All the tall talks of the State Government about fast-tracking agricultural growth will sound hollow as long as the farmers do not have access to storage facilities and market linkage. Expanding organic farming to horticultural crops can do a world of good to horticulture and food processing. This is particularly relevant to exporting organic horticultural products, including processed food, that have a huge demand in the international market. The Act East Policy, too, needs to be oriented towards facilitating a sustained growth of sectors such as agriculture and horticulture with an eye on capturing the lucrative markets abroad. 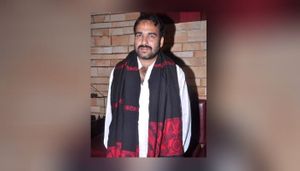 Pankaj Tripathi: I Know People Love Me Through Social Media