The Congress has called a meeting of the Congress Working Committee (CWC), its highest decision making body, on January 22 to discuss the farmers' issues, the Arnab Goswami chat leak and the Covid-19 pandemic, party sources said.
According to a source, the meeting will be held virtually and will be chaired by Congress interim president Sonia Gandhi. The source said that the Congress will discuss Goswami's alleged chat leak related to national security in the meeting. The issues of farmers' agitation and Covid-19 are also likely to be discussed in the meeting.
Thousands of farmers have been protesting against the three farm laws on the borders of the national capital since November 26 last year, demanding that the three laws be repealed.
On Wednesday, the 10th round of talks between the farmers and the government once again remained inconclusive.
On Tuesday, former Congress chief Rahul Gandhi had slammed the government over the three farm laws, saying they were introduced to destroy the Indian agricultural sector.
Earlier in the day, the Congress fielded former Defence Minister AK Antony, ex-Home Minister Sushil Shinde, former Law Minister and External Affairs Minister Salman Khurshid and leader of opposition in Rajya Sabha Ghulam Nabi Azad to corner the government over the alleged chat leaks involving Goswami.
The Congress described the leak of secret information as treason and demanded an immediate enquiry into the matter. - IANS 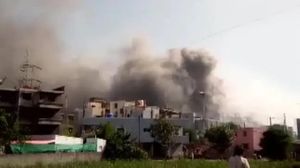