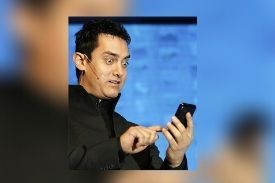 Aamir Khan decides to turn off his phone

Bollywood superstar Aamir Khan is going on a communication detox and has decided to turn off his phone completely, so that it doesn’t come in the way of work and personal life.

The actor’s spokesperson revealed that Aamir took a break from Laal Singh Chaddha to shoot a cameo for his friend, Amin Hajee’s directorial debut Koi Jaane Na in Jaipur.

It is now learned that Aamir is back in Mumbai and all geared up to get back to his own film, Laal Singh Chaddha. He will finish the pending schedule of the film and then get into post-production with director Advait Chandan, to get it ready for a Christmas 2021 release.

In doing so, Aamir has decided to turn off his phone completely so that it doesn’t come in the way of conducting work and personal life.

“Aamir feels that he is addicted to his cellphone and that’s impacting his personal and professional space. Hence, he has decided to go incognito and operate like in the olden days,” said the source.

The source added that Aamir has asked “all his close confidantes to reach out to his manager in case of urgency or work-related queries”, adding: “Even his social media accounts now will be managed by the team until the release of Laal Singh Chaddha.”

Laal Singh Chaddha, an official Hindi remake of 1994 Hollywood hit Forrest Gump starring Tom Hanks and Robin Wright, has been delayed by an entire year. The film, originally slated for a Christmas 2020 release, will now release in theatres on Christmas this year.

The film was in production when the coronavirus pandemic halted shooting abruptly.

The shooting of the film resumed in Turkey in August last year.

Kareena Kapoor plays the female lead in the film. The comedy drama also stars Vijay Sethupathi, who will be making his debut in Hindi movies, along with Mona Singh. The filming of Laal Singh Chaddha started in Chandigarh in November 2019 and has been shot in 100 different locations all over India.

Speaking of the project earlier, Aamir had said, “I have always loved Forrest Gump as a script. It is a wonderful story about this character. It is a life affirming story. It is a feel good film. It is a film for the whole family.” (Source: IANS)