Homegrown movie and events ticketing platform BookMyShow on Friday rolled out a transaction video-on-demand (TVOD) streaming platform in India that offers users the option to rent a movie for a finite duration or buy it for unlimited access.

The move comes at a time when the Covid-19 pandemic greatly disrupted the movie viewing experience as restrictions kept theatres out of bounds for the audience for months.

With over 600 movie titles and over 72,000 hours of content, BookMyShow Stream will feature films and content from around the world along with India, the platform said.

With over 22,000 hours of content being "Exclusive" to the platform at launch, BookMyShow Stream will feature multiple marquee Premieres every Friday, it added.

"BookMyShow Stream' is a natural extension of our cinemas business and respects the existing theatrical windows for content. It empowers users to pay only for the content that they watch -- a prevalent trend in other global cinema markets, as yet untapped at scale in India," Ashish Saksena, Chief Operating Officer -- Cinemas, BookMyShow, said in a statement.

"With flexible purchase options and a seamless user interface, this new offering furthers BookMyShow's journey from being a gateway to an evolved curator of tent pole content experiences."

Besides these, films like "Alone", "Yes God Yes", "The Peanut Butter Falcon", "The Guilty", "Les Miserables", "Unhinged" and acclaimed Russian Sci-fi thriller "Coma", from premium independent studios will premiere exclusively on the platform.

The platform will feature Hollywood content through partnerships with leading global production giants including Sony Pictures, Warner Brothers and Universal Pictures, among others.

It will also bring films from the library of major Indian production houses such as Viacom18, Shemaroo and Rajshri Productions as also regional content providers like Divo and Sillymonks, among several others.

BookMyShow Stream will be one of the first Indian streaming platforms to host acquired content from independent film distributors like PictureWorks, Superfine Films, Impact Films, Kahwa Entertainment and VR films.

The platform is designed to offer a personalised experience based on a user's preferences, transaction and behaviour on BookMyShow.

It will be available for viewing on BookMyShow's mobile app and website as also Apple TV, Android TV, Firestick, Chromecast and desktop browsers, the company said, adding that the platform will allow users to experience features such as downloads, offline viewing and casting. 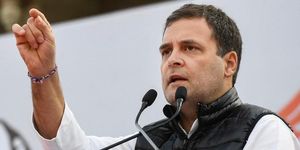