Farmers fear exploitation in the hands of companies as they will have to become dependent on the MNCs for their livelihood. Companies will like to invest only in the agriculturally prosperous regions which have adequate irrigation facility, this can lead to unbalanced regional development.

Thousands of farmers have been braving the sheer cold of North India protesting against the three farm laws passed by the Central Government with no end to the deadlock for months. In this context, there is a dire need to look at the myriad challenges plugging the agricultural sector of India and the ways to resolve them with greater dialogue among all stakeholders.

One of the most pressing problems has been the sustainability of the pattern of agricultural development adopted in India. Punjab and Haryana which were the major beneficiaries of the Green Revolution in the 1960s are now facing challenges of stagnant agricultural growth, subsidized electricity leading to overuse of tube-well irrigation causing depletion of groundwater, contamination of groundwater, overuse of pesticides and fertilizers especially nitrates, phosphates and potash which causes algael bloom, euthropication. The crisis is so grave that according to a central estimate, “over 70% of blocks in Punjab are in the dark zone on underground water stocks”.

It is because of this unsustainable pattern of agricultural growth with declining agricultural productivity even in the hitherto agriculturally prosperous regions which is a major cause for the farmer’s heavy reliance on government’s MSP: one of the major reasons of controversy on the farm Bills.

The poor performance of the agricultural sector not only has repercussions for food security but also has adverse socio-economic effects like rural out-migration, feminization of agriculture, skewed sex ratio in rural and urban areas, farmer suicides, heightened pressure on urban infrastructure, etc.

Today’s agricultural sector is replete with a lot of challenges like fragmented land holdings (85% of farmers in India are small and marginal with less than 2 hectares of land). Small land holdings make farming economically unviable, create hindrances for use of farm machinery and access of capital from institutionalized sources of credit like banks. Another problem is the lack of crop diversification – the Green Revolution and skewed MSP policy of the Government have resulted in large proportion of land being diverted to growing of cereals like wheat and rice. Farmers hardly have incentives to grow pulses, millets and oilseeds which are less water-intensive, more resistant to heat and drought-like conditions and could address the problem of micronutrient deficiency, hidden hunger in the Indian population. Rainfed agriculture in India still occupies 67% of net sown area in India. This makes the farmers dependent on monsoon rainfall which has become highly irregular owing to climate change and events like El Nino.

Water use efficiency of the existing irrigation facilities is also very low. Flood irrigation technique is wasteful and causes soil erosion while canal irrigation has the problem of high evaporative losses during storage and transportation. There is a need to shift towards micro irrigation systems like drip irrigation, sprinkler irrigation, etc. The Pradhan Mantri Krishi Sinchayee Yojana is a step in the right direction with the aim of ‘per drop, more crop’. Fertigation is needed along with micro irrigation by subsidizing liquid fertilizers so that there is no wastage and overuse of fertilizers. With respect to fertilizers, urea and other secondary micronutrients should be brought under the ‘nutrient-based subsidy’ regime so that environmental degradation caused by overuse of urea can be tackled.

The soil health cards have played a significant role in filling the knowledge deficit of farmers with respect to the correct application of fertilizers. According to a study by the National Productivity Council, soil health card recommendations have led to the decline of 8-10% in use of chemicals and rise in productivity by 5-6%.

Contract farming is often mooted as a solution which could bring about greater private investment in the agricultural sector. Contract farming has been provided for in the farm laws. Contract farming does have the potential to ensure a guaranteed market outlet for the farmers without having to worry about price volatilities. Moreover, the farmers can get assess to inputs like advanced seeds, fertilizers, pesticides, farm machinery, etc., from the companies. But it too is not without problems. Farmers fear exploitation in the hands of companies as they will have to become dependent on the MNCs for their livelihood. Companies will like to invest only in the agriculturally prosperous regions which have adequate irrigation facility, this can lead to unbalanced regional development. Therefore we cannot turn a blind eye to the challenges that comes with contract farming.

What is needed in today’s time is a different perspective altogether of looking at agriculture. Agriculture has to be made sustainable to tackle the new challenges like climate change. Climate change brings with it a plethora of problems like changed pattern of monsoon, escalation in heat waves, increased disease and pest attacks, increase in the intensity and frequency of disasters like droughts, floods, etc. Agriculture itself is regarded as a major source of greenhouse gases; for example, the rice fields emanate methane. There is a need for increased investment in research and development to produce new varieties of seeds which are of short duration, and are heat and drought resistant. The indigenous knowledge of the farming communities has to be given top most priority in the efforts of research and development. The kuttanad rice cultivation in the low-lying areas of Kerala is a case in point.

Innovative farming techniques like that of ‘zero budget natural farming’ given by Subhash Palekhar could go on a long way in ensuring both ecological sustainability as well as doubling of farmers’ income. Similarly, organic farming has a lot of potential especially in the north-eastern States as the penetration of chemical fertilizers and pesticides has been relatively lesser in these States. Inter-cropping, crop rotation, integrated pest management, precision agriculture, conservation tillage, agro forestry, legume intensification, systems of rice intensification are some of the other techniques to ensure sustainable agriculture.

Some of the other reforms needed in the agricultural sector are developing agriculture into ‘agribusiness’ or ‘agripreneurship’ by investing in food processing infrastructure, warehousing and storage facilities, in ripening chambers, pack houses, refrigerated vans, etc. Creation of a stable and unified market is a much-needed reform for better price discovery by the farmers. Here, the creation of ‘e-NAM’ is a step in the right direction. Development of the land lease market and encouraging land consolidation are important to tackle the problem of land fragmentation. Lastly, strengthening of agricultural extension services with on field demonstration of latest technologies is needed.

The present Government has come up with various new initiatives for agriculture like Pradhan Mantra Kisan Samman Nidhi, PM Fasal Bima Yojana, Paramparagat Krishi Vikas Yojana, etc. However, more needs to be done to realize the goal of doubling farmers’ income by 2022-23. Any such big reform has to come after sufficient consultation with the farmers so that the reforms do not meet with the same fate as the farm Bills. 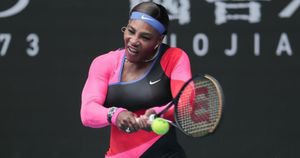 Easy win for Serena, Osaka, Djokovic on day one of Australian Open