Sources told IANS that the move came after senior AAP functionaries decided to visit the protesting farmers in a meeting on Thursday night. They also informed that AAP leaders planned to visit the farmers' protest sites at the borders to take stock of water, toilets and civic amenities being provided to them by the Delhi government.

The AAP government has been supporting the protesting farmers since the beginning of their agitation. AAP Chief and Delhi Chief Minister Arvind Kejriwal on Friday again came out in support of the farmers and tweeted, "We are standing with the farmers. Your demands are genuine. Defaming and calling farmers anti-national is completely wrong."

Another senior AAP leader Satyendar Jain, who heads several key departments in the Delhi government, visited the Singhu border where farmers have been protesting for the past two months.

Jain was accompanied by AAP National Spokesperson and Vice-Chairman of the Delhi Jal Board (DJB) Raghav Chadha who before leaving the protest site alleged that Delhi police tried to interrupt the water supply to the farmers. 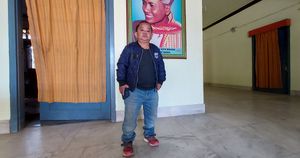